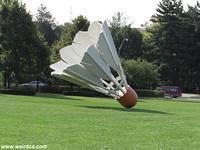 One of Four Giant Shuttlecocks in Kansas City

In 1994 the Nelson Atkins Museum of Art commissioned a sculpture from Claes Oldenburg and Coosje van Bruggen. They built four giant birdies around the lawns of the museum, imagining the main building as the badminton net and the lawn as the playing field.

Each shuttlecock is eighteen feet tall, weighs 5,500 pounds, and has a diameter of 16 feet. Each one is situated at a different angle. Three lie on one side of the building, and the beginning shuttlecock is at the front entrance.

The birdies are in fairly stark contrast to much of the rest of the art, which involves art from all walks of life and cultures. The Museum itself is extremely pretty with some very unique architecture. Many different forms of exhibits are available, and it truly is a wonderful exhibit that if you're in the Kansas City area you should take a few hours to visit. Also it's free, with onsite parking only costing $5. 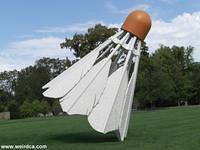 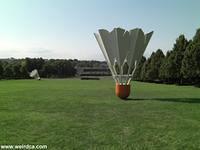 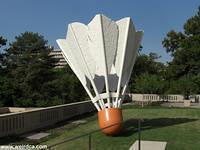