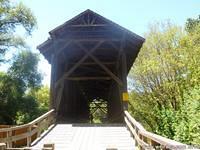 The tallest covered bridge in the United States was built in 1892 in Felton.
Tweet

Bridges are the stuff of fables as well as horror stories. In the stories, trolls are lurking beneath them and billy goats are trotting across them, so it should come as no surprise that even today, specters and spirits still haunt them. In addition, the sense of tragedy looms over them gathered from the lives lost as the bridges' victims take that final plunge. California is "lucky" enough to have two bridges popular for suicide victims. Add to that a gaggle of ghosts, and you have quite the collection of dubious bridges.