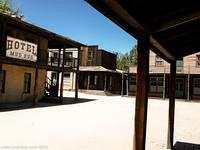 An entire western town can be found in Southern California!

Ah Hollywood. Movie mecca. With so many films and TV shows being made here in California, it's no wonder that we have so many famous movie locations. From the Alabama Hills west of Lone Pine to less natural sets like the western town of Paramount Ranch, California plays host to several unique and interesting film locations. So put on your favorite costumes, check out some of these famous movie spots, and maybe re-enact that popular movie you've watched dozens of times!