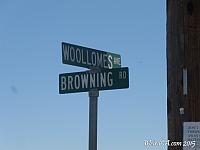 Browning Road in Delano is haunted by the ghost of a young woman!

Some roads are best left for driving on during the day. From ghosts to monsters to phantom cars to strange phenomenon, these roads have it all. Most are remote, in the middle of nowhere or on the outskirts of their towns. The ghostly inhabitants who terrorize motorists along these stretches of highway aren't confined to a single intersection, but have been known to make appearances all throughout their dark, twisty paths. So be careful while navigating these streets, for you might just pick up an unwanted extra passenger in your back seat, staring malevolently at you in your rear view mirror.