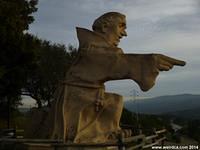 Heading down north bound 280 up in the Bay Area, shortly after you pass over Crystal Springs Road, where you get an excellent view of the famous Flintstone House, you'll enter Hillsborough and come upon the Crystal Springs Safety Roadside Rest Area. Right before the rest area, up on the hill on the right, over looking the highway is a gigantic statue of Father Junipero Serra.

Yes, that's right, a gigantic statue of Father Junipero Serra, his right arm up and pointing west out over the valley. The statue is 26 feet tall, made of concrete and depicts the missionary kneeling on one knee. The base of the statue is nine side, with each side listing one of the missions he helped build in California.

We here at WeirdCA.com receive several comments on our articles every week. We also receive emails periodically with stories, pictures, and information on various weird sites. We even very rarely receive some swag by snail mail. Well our very first ever letter, hand written no less, arrived from a reader who wished to remain anonymous. It was a wonderful letter, and we are honored that they took the time to write. In it was this amusing anecdote about the statue:

We called it "The Skyline Freeway", the freeway where the statue of Father Serra is located. It must've been in the late 70's a tire at the end of a long rope appeared hung off the statue's extended finger and for a week or two, thousands of commuters saw a yo-yo hanging off the statue's finger. 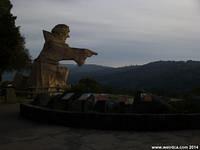 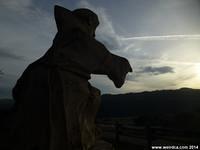 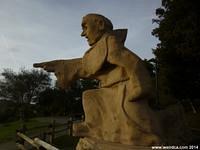 280 from Route 1 to 880 is also called the Junipero Serra Freeway. Father Junipero Serra founded nine of the twenty one Spanish Missions in California. In July, 1769 he began construction on the mission in San Diego. According to the base of the statue, the nine missions were:

The statue is accessible from the Crystal Springs Safety Roadside Rest Area. There is a gate and a path leading up the hill starting from around the bathrooms. 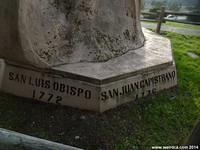 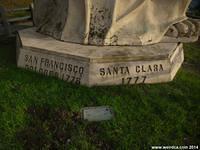 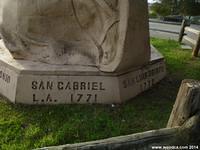