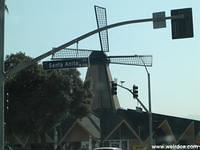 In Arcadia, east of Pasadena, near the Santa Anita Raceway sits a Denny's with a large windmill sprouting out of its roof. The building was built in 1967 by architects Harold Bissner and Harold Zook. It was the first Van de Kamp's Holland Dutch Bakery to feature a windmill. Sadly in 1989, Denny's took it over and stopped the windmill spinning. Now it is also the last of the windmill restaurants to survive from the former chain, and probably also the last surviving windmill topped restaurant in all of Southern California. It has a neat ruffle collar roof beneath the windmill. Happily, the windmill was started up again in 2016, with Denny's paying $100,000 to install a new motor, some reinforced blades, and even lights as the structure now lights up at night. 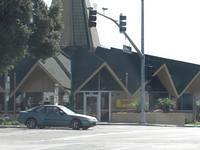 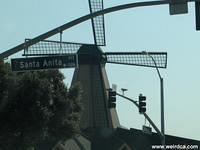