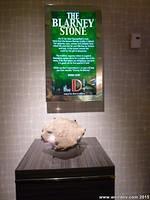 A chunk of the Blarney Stone from the actual Blarney Castle can be found on Fremont Street in Las Vegas. 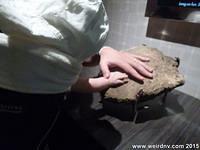 So the actual Blarney Stone is located far away at Blarney Castle in Ireland, but Nevada happens to have not one, but two chunks of rock from that castle. Actual tradition states that you have to hang yourself upside down and give the real Blarney Stone a kiss, but it's probably not best to try that out at the two Nevada stones. Both originally could be found at Fitzgerald's Casinos, one stone at the Reno location (sine 1988) and one stone at the Las Vegas location on Fremont Street (since 1987).

But sadly both Fitzgerald's Casinos closed, the Reno location in 2008 and the Las Vegas location was sold in 2011. Clearly both stones are lucky, because even though every other feature or remnant of Fitzgerald's is now long gone, the stones still remain. The Reno stone is still embedded in the wall outside formerly near the front entrance to Fitzgerald's. While the Las Vegas stone is now on display at the casino known as The D, which opened in 2012 after purchasing Fitzgerald's. The stone can be found on the second floor and is the only Irish decor to be found in the entire D.

So if you're in either Reno or Las Vegas, track down the Blarney Stone for either town and give it a rub for good luck. 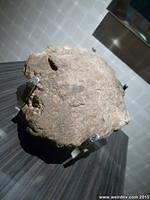 The Blarney Stone in Las Vegas 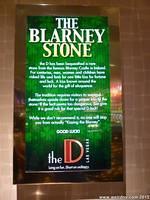 The Blarney Stone at The D 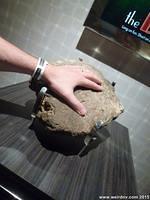 Getting some luck on Fremont Street