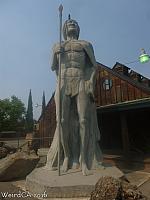 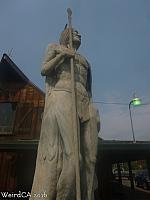 Steele Realty is located in Elk Grove and has been in operation since 1988. Since at least 2003, Ray Steele, also known as Mr. Buffalo, has been collecting large statues, as well as old farming machinery and other roadside attractions. The two most notable pieces are a giant buffalo and a giant Native American. Both are made out of concrete, a lot of concrete, and although the two appear to have been created by Ken Fox, the same Ken Fox who sculpted the Auburn Statues, they are actually not. It was brought to our attention by his son, Jeremy, that they were actually created by Bruce Carty, who had Fox as a teacher. You can find his signature at the base of both sculptures!

The Native American is extremely tall, just like several of the Auburn Statues, and is taller than the nearby building. For some reason, the buffalo additionally has a time capsule in its rear end. 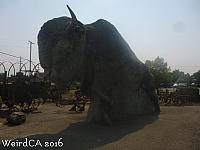 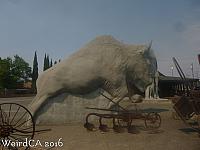 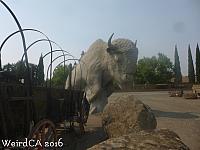 The grounds also has all sorts of farm machinery scattered around. And there's also a giant shoe with a roof on top of it. It sits on four wheels, and advertises "We Have a Home for Everyone". There also use to be a large statue of a miner and a giant bust of Abraham Lincoln, but those have been gone for a few years now. 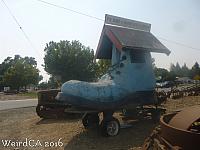 A giant shoe in Elk Grove 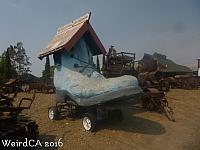 We Have a Home for Everyone! 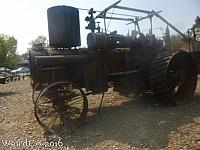 Steele Realty and Investment Company has been in business for over fifty years and handles real estate for Elk Grove and other Sacramento County towns including Wilton, Galt, and Herald. 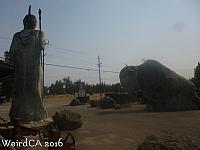 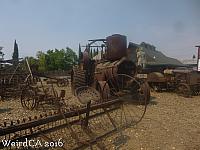 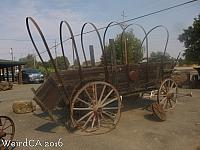 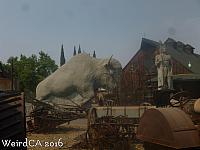