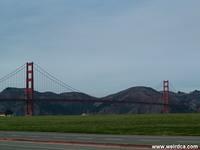 The bridge with the second highest number of suicides in the world is located in San Francisco. Yes, it is the Golden Gate Bridge. At a cost of $35 million, the 1.7 mile structure was opened on May 27th, 1937. About ten weeks later, Harold B Wobler left his job on a barge, strolled onto the bridge, talked with a tourist, and then jumped over the side, becoming the first of currently well over a fifteen hundred suicides.

The Golden Gate Bridge is named so because it crosses the Golden Gate Strait, or the entrance to the San Francisco Bay from the Pacific Ocean. The color of the bridge is actually classified as orange vermilion and is often called "International Orange". Construction began in 1933 and due to special safety nets, only eleven people died during the construction. Ten of them were lost in one incident when a piece of scaffolding broke through the safety net. Suspended under the entire length of the bridge, the safety net was mostly unheard of in construction at the time. It saved nineteen people during construction. These men are now known as the Halfway to Hell Club.

About every two weeks, one person jumps off the bridge. The east side, looking at the city, is more popular for committing suicide. The first survivor was number 35, 22 year old Cornelia Van Ireland in 1941. As of 2013 only 34 people have survived. In 1988, Sarah Rutledge Birnbaum became what is likely the only person to have jumped from the bridge twice. She did not survive to make a third attempt. 1993 saw Roy Larson Raymond, founder and former owner of Victoria Secret commit suicide on the bridge. This was eleven years after he sold the company. Rumor has it that in the early nineties, even a dog ran out onto the bridge and jumped over the side. Its final path through the city was documented on its trek to take its own life. The youngest suicide victim was Marilyn DeMont who in 1945 at the age of five was commanded to jump by her father, August DeMont, who followed her over the bridge. The youngest victim of the bridge is Kellie Page who at age three was thrown off the bridge by her father, Steven Page, who jumped soon after.

Newspapers use to report the death toll, until the number grew close to 1000. Then the official death toll was stopped in order to avoid fame seekers from trying to be the 1000th person. The unofficial total is now over 1600 victims. That number includes only those victims where either a body was recovered or someone saw the person jump. Jumpers reach an estimated 75 to 80 miles per hour before crashing into the water below. The few survivors all went in feet first. Several suicides in 2004 were caught on tape during the filming of Eric Steele's documentary The Bridge. Additionally, it is a proven fact that people have passed over the much higher San Francisco Oakland Bay Bridge on their way to jump off the Golden Gate Bridge. In the seventies, a morbid group called the Suicide Club held lavish parties every time a suicide occurred.

Joseph Strauss was the chief engineer on the Golden Gate Bridge. Born in 1870 he passed on May 16, 1938, less than one year after the Golden Gate opened. Although he is primarily known for building the Golden Gate, he built several other lesser known bridges, particularly a few that still stand in San Francisco.

The 4th Street Bridge or Peter R. Maloney Bridge was also designed by Strauss. Officially complete on May 23rd 1917, the bridge was then built for $89,672.09. It is the oldest operating drawbridge in the state of California and spans 94 feet. It is a Strauss vertical overhead counterweight type bascule bridge.

The 3rd Street Bridge or Lefty O'Doul Bridge near AT&T Park is also a Strauss Bridge and was completed in 1933. It is an example of a Strauss heel-trunnion bascule bridge. It's main span is 143 feet and the bridge is 295 feet in length.

Both bridges cross the China Basin in San Francisco.

The bridge with the most suicides in the world is the Nanjing Yangtze River Bridge in China, which surpassed the Golden Gate Bridge in 2006 as number one. It is estimated that over 2000 people have jumped from it. 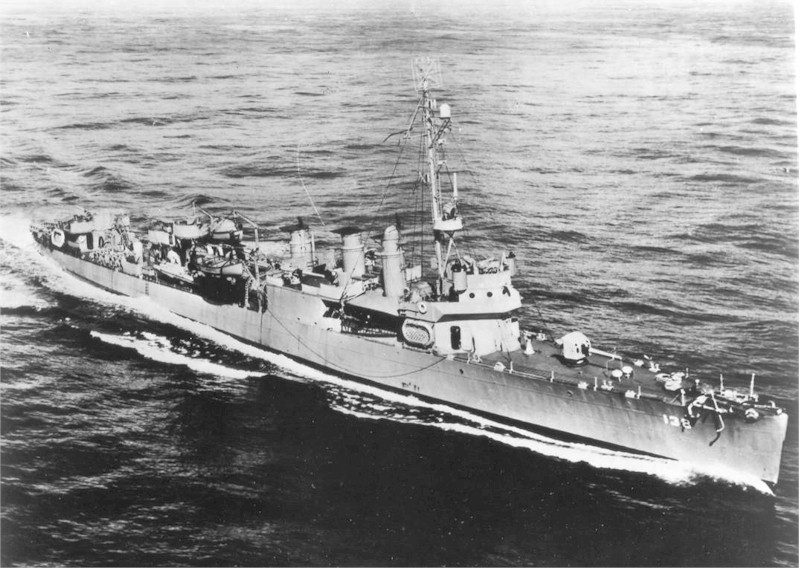 All of these deaths have obviously left their scars on the beautiful bridge. Some witnesses report that they can hear screams trailing off in the distance during fog shrouded nights. Although pedestrian traffic on the bridge is restricted at night, bicycles are still allowed onto the bridge.

And of course then there's the ghost ship. In 1853, the Tennessee, a two masted clipper ship ran across rocks in the fog near the Golden Gate Strait. Now it passes ghostly under the Golden Gate Bridge, reportedly unmanned, sailing through the fog. In November 1942, the USS Kennison passed by the ghost ship. Sailors and crew on board reported seeing the ship, watching its wake, but nothing was registered by the ship's radar. The Tennessee seems to always appear on fog shrouded nights, its decks are always deserted, and it fades away about a minute after first appearing.

Ghosts not with standing, the Golden Gate Bridge is able to sway twenty seven feet in order to bear the winds which can reach one hundred miles per hour. The two gigantic cables consist of 80,000 miles of steel wire which is enough to take the strands and encircle the earth at the equator three times. The concrete in the piers and anchorages could pave a five foot wide sidewalk from San Francisco to New York. 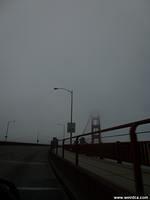 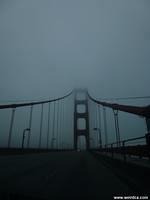 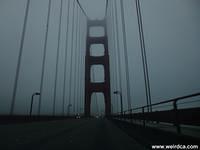