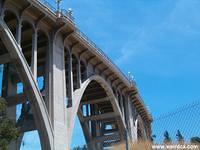 When the beautiful bridge along Colorado Street over the Arroyo Seco River bed was built in Pasadena back in 1912, I'm sure the builders never thought it would acquire the nick name, "Suicide Bridge", a name it acquired way back in 1932.

The Colorado Street Bridge curves over the river bed, giving the bridge a rather unique perspective as you drive over it. Along with the lamps located at regular intervals, the bridge has a very romantic and old charm look from a distance. But this unique structure has seen over 100 people commit suicide from it, plummeting the 150 feet to the ground below. 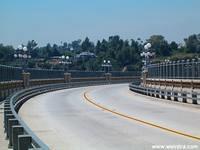 Looking along the Colorado Street Bridge

The first suicide was on November 16, 1919, and nearly fifty of the suicides occurred during the Great Depression from 1933 to 1937. Another report predicts that ninety-five people committed suicide from the bridge between the years of 1919 and 1937. The Pasadena Central Library has three thick binders on the bridge filled with all sorts of interesting articles and historical facts on the structure. The bridge underwent a twenty seven million dollar renovation in 1993, during which it received a suicide barrier. This has reduced the number of suicides, although the bridge still retains its nickname.

Along with the suicides, of course, came the ghosts. Several spirits haunt the bridge, including a man with wire rimmed glasses and a vanishing woman in a long flowing robe. She is often seen standing atop one of the parapets, vanishing as she throws herself off. Even below the bridge, ghosts are said to walk the river bed. Strange sounds and cries echo throughout the dark nights. Misty forms have been reported and animals act strange in the area. Homeless camping under the bridge have regularly reported seeing ghostly figures and hearing mysterious noises. A haunt wandering under the bridge whispers "her fault" to anyone he runs across, although no one knows who he means.

Urban legends of course surround the history of the bridge. During the bridge's construction, a worker apparently toppled over the side of the bridge and fell into wet concrete below. He was, according to rumor, left to die in the quick drying cement, entombed forever. Of course, he's now a ghost haunting the bridge. Some legends state that he's the reason the bridge has claimed so many lives, that his ghost calls to those in crisis, urging them to come to the bridge and take their own lives.

Another story surrounds a suicide attempt that happened on May 1, 1937. Myrtle Ward, a despondent 22 year old mother, took her three year old daughter, Jeanette, to the bridge that morning. One story says she had supposedly been left by Jeanette's father. Myrtle walked up to the side of the bridge and threw her baby girl, Jeanette, off. And then immediately jumped over herself (apparently so they could be together in the afterlife). In a remarkable twist of fate, somehow, the baby landed in thick branches of a nearby tree, slowing her descent until she came to the ground mostly unharmed, but her mother, Myrtle, plummeted to her death. She now is also rumored to haunt the bridge still searching for her baby.

Another unusual suicide was in 2008 when a man who had stabbed and killed both his son's mother and maternal grandmother, went to the bridge soon after the murders and jumped.

It appears that both above and below, the spirits of the dead, long ago claimed by the bridge, still linger, doomed to wander the bridge where they took their lives. Below the bridge is a maze of streets and other bridges. There are also stairs going down from somewhere near the center of the bridge, but there's no where convenient to park underneath. A "slide" or spillway also lies under the bridge (at least two, one goes through a tunnel), and local kids have referred to it as "The Slide" and spray painted it with "Angel of the Slide". Local kids would go there in the sixties and seventies and slide down the spillway either sitting down or standing up. Special thanks to Mike Zens who has provided us with a photo of the spray paint and the entrance to "The Slide".

Colorado Street is now called Colorado Boulevard. On the west side of the bridge, exit Highway 134 at Orange Grove, go North one block, turn right onto Green, then right on Grand which will immediately end near a grassy park like area. Park, walk to the left to the bridge. To drive across the bridge, leave Grand, head back towards the 134 on-ramp and actually take the 134 West on-ramp, but veer towards the left and onto the bridge instead of right and onto the highway. 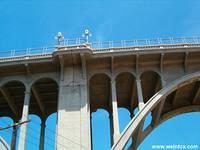 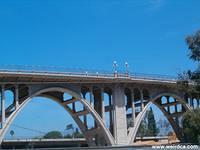 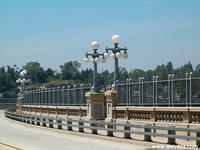