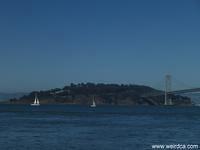 The man made island Treasure Island connects to Yerba Buena Island by a small isthmus and until 1996 both islands were used for a Naval base. Treasure Island was built between 1936 and 1937 for the World's Fair, the 1939 Golden Gate International Exposition. The island is named after Robert Louis Stevenson's novel, Treasure Island. Stevenson lived in San Francisco from 1879 to 1880.

Before California became a state, however, Yerba Buena Island was known for its phantom cow, which could be seen wandering the island mooing mournfully. Supposedly the story goes that the cow's calf was butchered and devoured by pirates. The cow now sorrowfully roams the island searching for its lost eaten calf.

The Ghosts of the Bay Bridge 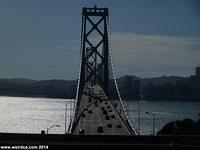 Bay Bridge - looking towards SF above the Yerba Buena Tunnel

Ghosts are also said to haunt the Bay Bridge. One ghost appears on the upper span as you head back into San Francisco. He is seen after you emerge from the Yerba Buena Island tunnel, near the third tower on the northwest side of the bridge. The story explains that he broke down in 1948, running out of gas on the bridge. As he was walking to a phone to call for a tow truck he was hit by a car and killed. He now haunts the bridge, often able to be seen out of the corner of your eye, dressed in a forties style hat and raincoat, standing in the footpath.

If that wasn't enough, urban legends say that the ghost of the victim of the 1989 earthquake still haunts the bridge. In 1989 during the Loma Prieta earthquake, a fifty foot section of the upper deck of the eastern portion of the bridge collapsed onto the deck below. The story claims that on the eastern half, occasionally drivers have looked into their rear view mirror and seen a passenger hitching a ride from them in their back seat that shouldn't be there! The urban legends take it even further, with people having seen a headless man running next to their car. He is also believed to be the victim of the 1989 earthquake (although I believe the victim was a woman).

Lastly, drivers have reported knocking on their windows at night while driving on the lower deck towards Oakland.

After the 1989 earthquake, local ironworkers while fixing the collapsed span installed in secret and without Caltrans's approval, an 18 inch tall iron sculpture of a troll to the eastern span. The troll was created by blacksmith Bill Roan and was placed on the outside rail of the north side to protect the bridge from future earthquakes and disasters. The troll could really only be seen by boat, and its existence as a resident of the bridge was really only known by the ironworkers, maintenance workers, and Caltrans employees. Motorists were unable to see it.

After protecting the bridge and providing good luck and security for 24 years, on Labor Day of 2013, the troll was removed from the bridge as the portion of the bridge that he sat upon has formerly closed and has been replaced by a new bridge. The troll had a successful run, as no earthquakes have destroyed the bridge or even caused any closures since he came on duty. He will probably be retired to a future Bay Area transportation museum or possibly a park near the eastern end of the Bay Bridge. There is also a replica of the bridge troll at the Oakland Museum of California.

The new bridge has a new troll living on it protecting it from harm. It has taken up residence somewhere outside of direct sunlight (as trolls turn to stone in the sunlight), and supposedly in view of the bike and pedestrian path. Hopefully it will have a long and prosperous career guarding the bridge and those traveling across it. 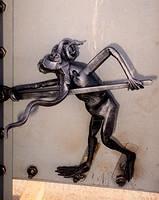 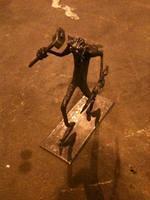 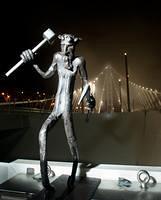 The Bay Bridge isn't the only bridge protected by trolls. In Seattle the Fremont Troll has protected the Aurora Bridge since 1990 and in Norway, trolls guard the Trollstiegen road which crosses the Stigofssen falls. The road even has a "Troll Crossing" sign.