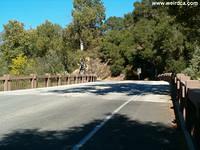 Just south of Ojai in Ventura County, along Creek Road is Camp Comfort County Park. Although the park looks peaceful enough, it certainly houses its share of spooky spirits. First is the ghost of a bride, complete with a bloody wedding dress. She is tall and slim, with light brown hair and a veil covering her face. The story tells that she was murdered on the day of her wedding, perhaps by a greedy new husband who married her only for her dowry. She has supposedly been seen with thumb out stretched, trying to hitch hike. Second is a spectral horsewoman that re-enacts her death every year on its anniversary. The horse gets spooked by a snake, subsequently throwing her off to her demise. Next up is a headless motorcyclist that can be found rocketing down the lonely road. The story goes that he was forced off the road by a pick up truck and was decapitated by either a wire fence or the branch of a tree. There is also the spirit of an old Indian shaman sporting feathers in his hair. Finally, the area hides the skeleton of a European Vampire who lies staked inside a stone coffin guarded by a huge black phantom dog. 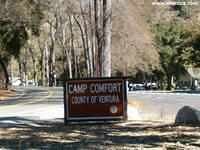 And in addition to the previous five spirits, determined ghost hunters can find even more spooks just north of the park on Creek Road near the two lane concrete bridge spanning San Antonio Creek. First there are two young children dressed in 19th Century style clothes. They walk along the rails of the bridge and finally jump off to plummet to the creek bed below. If you race to the railing, their forms will not be found on the other side. Next up is a dis-embodied child-like hand that runs along the railings of the bridge. Then there is a ghostly school bus which as local legend would have it, went off the bridge in the 30s or 40s. Twelve children and the bus driver died in the accident. The legend goes on to state that if you visit the bridge on rainy nights, you can hear the screams of the victims. However, even with all these spirits and spooks, the most famous of the inhabitants is Char Man.

According to urban legend, a vampire relocated to the Ojai area around 1890 from either Italy or Spain. He acquired a small ranch and kept a low profile. However, as soon as he arrived, local cattle began turning up dead and drained of blood. Shortly thereafter locals were assaulted by strange wolf like creatures. The townsfolk got up in arms and realizing that a vampire was in their midst, raided the vampire's ranch during the day.

But the vampire was prepared for that and had a huge black phantom dog guard his stone sarcophagus. It also drank blood. The ranchers eventually repelled the dog with a silver crucifix and closed in on the vampire's above ground stone tomb hidden by underbrush and weeds. Realizing, its master was in trouble, the black beast charged the ranchers again, only to be turned away as they sprinkled holy water at the hell beast.

With the dog retreating, the ranchers opened the stone casket and staked the evil monster that lay within, thus ending the vampire's short reign of terror. The casket or stone sarcophagus is said to still lie there, hidden away amongst the brush and weeds. It is an above ground tomb with a small window in it. You supposedly can peer in through the window and still see the skull of the vampire.

It has been speculated that this legend cropped up from a possible real life above ground tomb. It is plausible that an old family near the turn of the century could have buried their dead in this manner upon their estate. It is not only not unheard of, but also apparently the custom at the time in certain parts of Europe. Even the window in the stone coffin isn't completely unheard of. Stating that, however, if you are wandering around Camp Comfort County Park and come upon a stone sarcophagus with a skeleton inside, don't pull out the wooden stake.

Here, near the bridge, the ghost of Char Man, a hideous burnt beyond recognition spirit, emerges out of the forest and attacks motorists, especially those brave enough to get out of their cars and yell from the bridge. So popular is his legend in the area, that the bridge has been dubbed "Char-Man Bridge".

Possibly a ghost, possibly a hideous monster, Char Man, is no longer the man he once was. Now horribly charred, he is rumored to be covered in black burnt peeling skin, wearing little more than charred bandages and supposedly emits a disgusting burnt smell. He use to haunt Signal Street and Shelf Road, but as those areas became more and more populated, the legend migrated to the lesser inhabited area on Creek Road. Part of the story involves stopping your car on the bridge, getting out and yelling "Help Me! Help Me!" to which an incensed Char Man will come rampaging out of the forest and attack you.

As with all good legends, there are three different yet similar origins. The first and second both occur in the fire of 1948. In the first story, a father and son are caught in the fire. Both are horribly burned beyond recognition, the father sadly passing away before help could arrive, the son mean while goes insane from his injuries. By the time rescue workers arrive, the son has skinned the father of all the burnt flesh and hung his lifeless remains from a nearby tree. The son, of course, eventually escapes into the woods and becomes the Char Man. 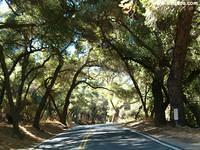 Ojai has a ghostly bride, covered in blood, attempting to hitch hike down Creek Road.

In the second story, a husband and wife are caught in the fire. The husband, horribly burned and injured, hears his wife trapped by the blaze yelling "Help me" over and over again. The husband due to the fire and his own injuries is unable to come to the aid of his wife and lies unable to move listening to her pleas for help as she is slowly consumed by the flames. Again the husband eventually becomes the Char Man. Supposedly the Ventura County Historical Museum claims that there were no victims in the fire in 1948, so these two origins already appear to have some flaws. There's yet another similar version floating around that states that Char Man was specifically a fire fighter who lost his life fighting the same blaze.

Finally a last theory takes place in the early fifties. It relates a story of a bad automobile fire (some versions place the automobile accident actually on the Char Man Bridge) in which the driver is hideously burned beyond recognition, but manages to barely survive, escaping into the nearby woods to become the Char Man. 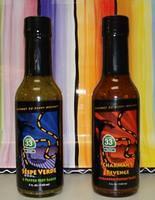 Some police officers claim yet another origin. In the sixties there was supposedly an elderly man who had a very bad case of skin cancer. His face and arm were badly disfigured and deformed. As he didn't like to be seen, he often took his dog for walks in the evening or late at night. During these strolls, he would occasionally be seen by local youth, who frightened, began propagating the Char Man stories. To muddle the tales even more, additionally later, there may even have been a Char Man hoax performed, which adds even more speculation on veracity of the entire Char Man legend.

So is the Char Man an elderly cancer case? Was he an elaborate hoax? Is he a monster or the ghost of a victim in the 1948 fire? Whatever, he is, the legend of the Char Man has now taken on a life of its own and just to be on the safe side, perhaps you should avoid stopping your car on the bridge along Creek Road.