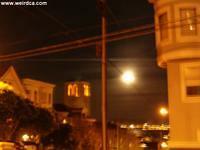 Was the tower of the Art Institute closed due to spirits or because of earthquake fears?

The SF Art Institute was founded in 1871 by artists, writers, and community leaders. On January 15th, 1927, it opened at its current location and with its red tiled roof, adobe ocher colored walls, and mission like bell tower rising from its courtyard patio, it is a very good example of Spanish Colonial Revival architecture.

Because the spirits of the dead were disturbed by the destruction of their cemetery, ghosts are said to be plentiful in the neighborhood. Lights turn off and on and sometimes off again for no reason. Doors open and shut by themselves. Power tools have turned on and off. Screams and noises have randomly been heard. And footsteps have been heard climbing the stairway of the tower. 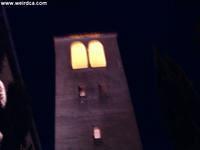 The school has been considered haunted for decades. The first known incident occurred in 1947 when Bill Morehouse, then the night watchman, decided to sleep in the tower in order to save some money. His first night there, around midnight, he heard footsteps coming up the stairs. Then, the door to the third floor opened and closed by itself. The footsteps continued past, but there was no one there. They moved on towards the observation deck and continued on up.

Morehouse, another night, had five friends hang out in the tower with him. The same thing happened. As the footsteps came up the stairs and reached the door on the third level, one of his friends threw open the door and yelled out "Surprise", but there was no one there. The footsteps continued past, invisibly, just like they had the night before.

A former student took a break on the third level of the tower and told a very similar story as Bill Morehouse. Other students and a janitor have also reported seeing or hearing ghosts climb the stairs of the tower. Around 1962, a night watchman reported hearing a woman's laughter and seeing a woman in a blue dress. She disappeared before he could investigate further. 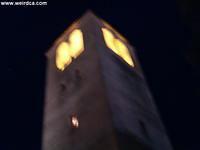 But it's not just phantom footsteps from a ghost marching up the tower each night. When closing the school down for the night, someone would walk through the school turning off all the lights one by one. Often when they'd leave and lock the front door, they'd look back and see one or two lights still on afterwards. Lights they assumed they had turned off. One time, after all the lights had been turned off as they shut the front door, every light in the building turned back on.

In 1968, they decided to remodel the tower and the incidents got worse. Workers reported an evil presence that they believed was both hindering construction and negatively influencing their lives. The ghost was blamed for health issues, personal problems, a tragic family incident, a motorcycle accident, and even a case of polio. Costly mistakes and near fatal accidents delayed the project for many months. The sounds of construction and the occasional scream was heard during this time period, just not usually when construction was actually taking place. And there was even a mysterious incident that involving the destruction of several chairs and other furniture.

A group of psychics was brought in. In an attempt to contact the ghost, they tried a seance, but the only thing they were able to gleam was that there were several frustrated spirits present. One medium, however, spoke of seeing a lost graveyard, which was probably a reference to the destroyed next door cemetery.

The tower of the San Francisco Art Institute is now closed. The official reason is due to seismic concerns. But could it be the spirits that are haunting it?