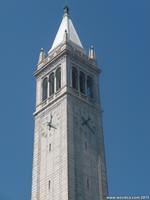 Sather Tower at U.C. Berkeley has had at least two suicide victims.

Containing 61 bells, 300,000 fossils, and one ghost, the Sather Tower on the University of California, Berkeley campus is the third tallest bell and clock tower in the world standing at 307 feet. It was built in 1914 and opened in 1917. The Tower contains a full concert carillon, which is a large musical instrument consisting of several bells contained in a bell tower. Sather Tower originally started with 12 bells, grew to 48 bells in October 1917, and reached its current total of 61 bells in 1983. The bells range in size from nineteen pounds to a 10,500 pound one called the Great Bear Bell. The Great Bear Bell has carvings of bears as well as the constellation of Ursa Major. It is rung once an hour.

200 feet up the tower is an observation deck. Sadly, two people have committed suicide by jumping off this observation deck. The first was on April 16, 1958 when Richard Saphir, a 67 year old retired attorney who had recently relocated to the area from Chicago, decided that instead of going to his psychiatrist appointment at 10am to jump to his death. His body was found fifteen feet away from the east side of the tower, face up. The second was on January 4, 1961. A 19 year old sophomore named John Patterson placed his math notebook down on the bench he was sitting at, ran at the side of the tower and simply vaulted over the rail. Soon after this glass panes were installed enclosing the platform, but they were removed in 1979 due to concerns over the panes muffling the sound of the bells. Metal anti suicide bars were later installed in 1981.

Now it is said that the ghost of John Patterson haunts the tower. His ghost has been seen in and around the tower. To add to the mystery, legend states that a photographer took a picture of the lawn outside and it showed a ghostly hand trying to reach out of the ground. Could it be the ghost of Patterson trying to escape the ground he landed on at the time of his death?

Rumored due to its cool, dry interior, Sather Tower also houses many of the Department of Integrative Biology's fossils, most of which are from La Brea Tar Pits down in Los Angeles, with a few from the McKittrick tar pits. There are about 300,000 fossils stored in five levels of Sather Tower. Campus legend claims that the tower's elevator use open onto the levels where the fossils are stored and animal skeletons has been placed before the doors in order to scare the occupants. 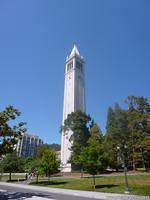 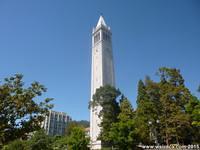 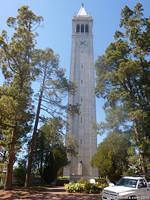 The Faculty Club - photo courtesy of Mark and Stephanie Olsen

Henry Morse Stephens (he went by his middle name, so generally you see his name listed as H. Morse Stephens), a professor of literature lived in room 219 of the Faculty Club for several years (some accounts say over 20, however I don't believe the Faculty Club had residents until 1902) until his death on April 16, 1919. At the time of his death he was working on two history projects, both of which sadly went unfinished. One involved documenting personal accounts of the earthquake of 1906. Morse had collected over 800 individual accounts as well as hoards of photographs and newspaper articles. Sadly his entire collection disappeared after he died, rumored to have been lost during a fire in Berkeley in 1923, although legends state that it might be hidden in a basement on campus somewhere, long forgotten. His other project involved documenting World War I, but this project also was cut short due to his death. Stephens Hall on campus is named after him.

The Faculty Club - photo courtesy of Mark and Stephanie Olsen

Perhaps it's both of these unfinished projects that keeps him haunting his old room at the Faculty Club. The ghost of Morse Stephens has been seen lounging in a chair with a book in his lap, often watching people silently. His voice has also been heard by students who happen to be walking past the window to his room. He has been heard reciting poetry. The most specific story of the haunting was by a visiting Japanese professor, Noriyuki Tokuda, who in 1974, while staying in the room, reported upon waking from a nap, seeing the ghost of Morse as a well dressed gentleman sitting in a chair. Tokuda also reportedly saw two heads floating high across the room towards him. Supposedly the Berkeley Daily Gazette ran an article on the incident and it has been framed and hung in the Faculty Club's offices. Room 219 now has a plaque above it, and is referred to as the "Spirit Tower", although that supposedly has something to do with school spirit and supporting the sports program at the school and not to any ghosts that might happen to reside within . . . um, yeah, right . . .

But it might not just be Morse Stephen's ghost haunting the room. A psychic visited the Faculty Club in 2009 and although he was unable to communicate with Morse, he was able to reach the captain of the 1920 football team who had died of pneumonia.

So the Faculty Club on campus might be haunted by the spirit of H. Morse Stephens, or quite possibly a former football player, or perhaps both. Regardless, to this day staff members still claim to see the room lights flickering on and off as well as hear objects being moved around in the room. Visit the Spirit Tower if you dare! 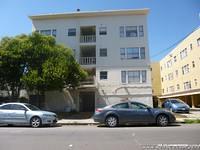 Today Barrington Hall is currently a privately operated student housing for U.C. Berkeley. But when it originally opened in 1935, it was a student housing cooperative. From the sixties all the way up to 1990, it had a terrible reputation in the neighborhood. Although those who lived in the hall supported social activism and encouraged alternative lifestyles, a variety of complaints piled up against the hall over the years. The major one was the implication that Barrington Hall was a drug den, but terrible maintenance on the building plus horrid community relations within their neighborhood also played a part. By 1989, neighbors brought forth both federal and state lawsuits both over heroin dealing and in an attempt to collect financial damages over the loss of property by being in the same neighborhood as the hall. In March 1990, while during an attempt to close the hall down, a simple poetry reading escalated into full on riots culminating in twenty foot tall fires. The hall was ultimately shut down in September 1990.

Today the hall is privately owned and still used for student housing. With such a traumatic history, it's no wonder that some of the residents believe the hall to be haunted. The center stairwell is the location in the building that receives the most activity. Legend has it that a student hung himself there and now his ghost haunts the building. A bizarre shadowy figure has been seen climbing the stairs up to the third floor. There he silently enters each room, one after the other, checking and quietly staring at each sleeping resident. The belief is that the shadowy figure was a former third floor resident.

Another story might have originated with some confusion around our next haunted locale in Berkeley. A strange resident has been seen and he assists both residents and visitors to the hall alike, often having assisted visitors find their way through the hall, only to vanish after helping. The stories, and there have been a few, sometimes claim his name is Cloyne. Which is also the name of our next haunted site: Cloyne Court. Does a ghost named Cloyne haunt Barrington Hall or are the two ghost stories simply merging together and tellers of the tale are simply giving this ghost the same name? Additionally, during the riot plagued year of 1990, a 20 year old student and resident of Barrington Hall named Juan Mendoza fell off the roof of the building and sadly died. Perhaps he is one of the spirits that still haunts the building? 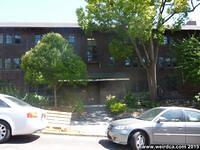 Cloyne Court is currently a substance free student run cooperative residence that's part of the Berkeley Student Cooperative. It has been substance free (no smoking, no drugs, no alcohol) since Spring 2014 due to several drug incidents that happened in the building including a cocaine overdose in 2010.

The building was originally built in 1904 as a hotel for visiting professors and some university faculty. It was named after Cloyne, Ireland, the village that George Berkeley was bishop. Somehow the name of the village, which is the name of this building, ended up the name of a ghost in stories about Barrington Hall (see above). In 1946 Cloye Court became part of the student cooperative. Today it houses about 140 residents.

The legends of the place talk of strange sounds having been heard in the west wing. These sounds include running footsteps and spectral voices engaged in an argument, their disembodied voices raised in anger. Supposedly the west wing is now haunted by the ghosts of a family that all died in incident back in 1929. The man in the family killed his wife, his dogs, and then finally himself. Do the ghosts of the family still argue and haunt the west wing of the building?

Other Ghost Stories on Campus 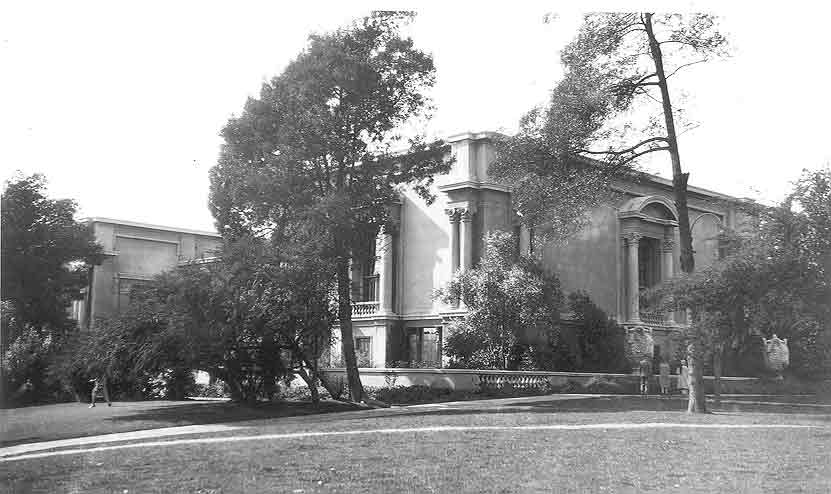 The Hearst Gymnasium in 1927 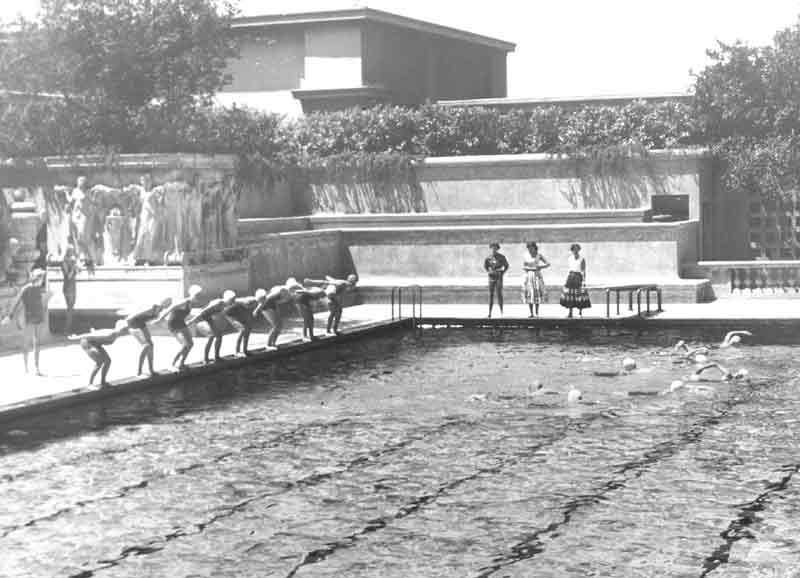 Beneath the Hearst Swimming Pool lies thousands of bodies!

In the 1960s the remains of about 12,000 Native Americans were dug up on campus and for whatever reason stored in Hearst Gym, under the swimming pool to be more precise. The gym's basement actually contains multiple cabinets and drawers filled with the bones of Native Americans. And of course, with so many remains in one place, widely considered in a disrespectful manner, the stories of ghosts and strange sightings have run rampant. Flickering lights, strange tapping noises, and general feelings of unease of have dominated the fears of those working there, especially with some of the minimal lighting down in the basement. Native Americans have called the conditions their ancestors are in, unacceptable and not suitable. They are afraid that it could lead to unrest among their spirits. The university has been trying to give back the remains to their correct tribes, but so far only 315 of the 12,000 have been returned and the process is slow and expensive. Until such a day as the bones are returned to their tribes of origin, the workers of Hearst Gym will just have to share their time with the unrestful spirits of 12,000 Native Americans.

Lastly, we have the ghost of Pedro or more specifically Pedro's lover. If you wander the campus late at night, you might run across her, the ghost of a woman, rumored to be the daughter of Don Jose Domingo Peralta, searching for her long lost lover, Pedro. The story claims that they were separated in life and never reunited and now in death her ghost roams the campus, looking for her lost love, calling out his name. So if you hear "Pedro" in your midnight wanderings, perhaps you should head to safety as soon as you can.

Interested in something non haunted on the UC Berkeley campus? Try the 60,000 foot Pillar of Air!

Photos of the Faculty Club courtesy of Stephanie and Mark Olsen