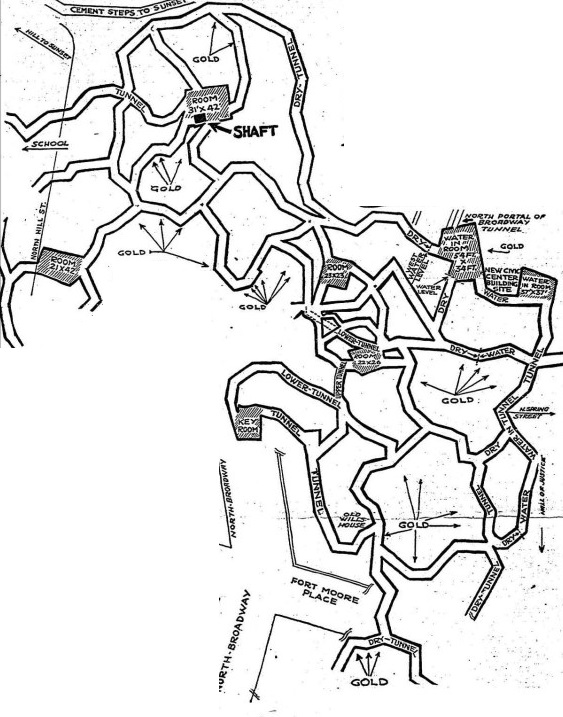 Map of the Lizard Man City - source: multiple places on the Internet

Several conspiracy theories state that a race of Lizard People or Reptiles lives beneath Earth's surface. If you're fan of the British sci-fi series, Doctor Who, they could be similar to the Silurians. In California their underground bases are rumored to be about 2000 feet beneath Los Angeles and Mount Shasta. They are also rumored to have connections and dealings with the military thus their underground tunnels also reach several military bases including Vandenberg AFB. (When I lived in New Jersey, their tunnels were rumored to connect to several of the ITT managed military installations in northern NJ.)

Much of the Lizard People legend comes from a 1933 or 1934 incident involving a mining engineer named G. Warren Shufelt. In the thirties, Shufelt began digging a shaft down to the Lizard People's subterranean catacombs supposedly filled with gold and knowledge. Apparently Shufelt built some sort of radio x-ray device used to detect minerals from which he was able to map out the strange tunnels below LA. His findings were further expanded upon by Little Chief Greenleaf of the Hopi Indians. According to Native American legend, the tunnels were built over 5000 years ago with powerful chemicals. Little Chief Greenleaf also reported that the Lizard people were scientifically advanced compared to us, knew the history of the earth since its creation, and had discovered ways to predict earthquakes. Greenleaf also reported that he himself could predict earthquakes at least 96 hours in advance. Oh, and naturally the history of the earth was written down on gold tablets.

Ironically the LA Times reported much of this information on the front page of their newspaper on January 29, 1934. Shufelt's shaft was dug about 250 feet down into the earth before the project was somehow canceled and the hole filled in. The location of the shaft was 518 Hill Street. Shufelt's project was canceled on March 5th, 1934. The original contract stated that Shufelt and his people were to look for buried treasure, assume all costs, leave the site the way they found it, and pay the city fifty percent of any treasure they found. No treasure was ever turned over to the city.

Shufelt's radio x-ray device worked on the principal that all matter had its own unique radio frequency and that by tuning into that frequency, more of the same matter could be found. For example take say, some gold, place it in his device, and it should allow the user to point to more gold. Also take a hair from a subject, the device should point to the original subject. Shufelt was using the device when he discovered the caves. The caves of the Lizard People apparently go from LA to Pasadena with other tunnels branching off (presumably to other lizard people cities).

It is interesting to note, that Shufelt's wonderful invention has never been mass produced despite all the practical uses of such a device. It is also interesting to note that Greenleaf's method of detecting earthquakes has also not seen widespread use either.

Tales of Lizard People have also been associated with Mount Shasta. However it should be noted that Mount Shasta has been identified as the dwelling place for literally everything from aliens to Bigfoot to Atlanteans, etc.

In 1958, a sighting of a reptilian creature occurred over in Riverside by a man named Charles Wetzel. Was it one of the Lizard People?