The Curse of the Livermore Totem Pole 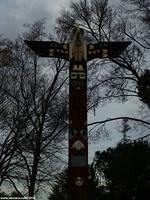 Livermore is under a terrible curse and this Totem Pole is in the middle of it!

The sewer system of the town of Livermore is cursed and it's all due to their treatment of a totem pole made by Adam Nordwald that is standing in Centennial Park on the northeast corner of 4th and Holmes.

Adam "Fortunate Eagle" Nordwall, a hereditary member of the Ojibwa Nation, originally carved the totem pole for a shopping center, but when they refused to pay him, he donated it to the city for their 100 year anniversary in 1969. The totem pole is symbolic of 100 years of Livermore history representing 1869 to 1969. Carvings on the totem pole depict the founder of the city, Robert Livermore. Atomic energy is also depicted in the totem pole, and each ring represents ten years. The pole is eighteen feet tall and was dedicated on May 18th, 1974.

However, at the time of its installation, city workers chopped off a few feet from the bottom of the totem pole. It is unclear why they did so, but Nordwall considered the act to have been a desecration of the sacred object he had built. He showed up before city council and demanded that they restore the totem pole back to its original height. His demands fell on deaf ears, and the city council refused to restore the pole. So Nordwall cursed the city's sewer system.

And two weeks later the entire sewer system backed up.

Livermore did eventually restore the totem pole to its original height, but they have never issued an apology to Nordwall. And thus Nordwall has never lifted the curse off the town. 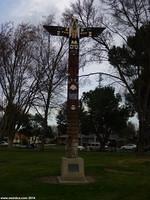 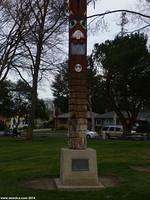 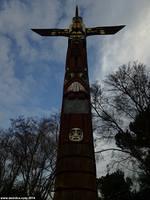 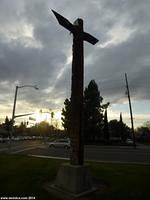 The curse has shown up in other ways too. In 1969 the Centennial Time Capsule was buried in the park, thus the name Centennial Park. But when it was time to unearth the capsule in 1999, it was no where to be found. The missing time capsule was eventually discovered, hiding right under the cursed totem pole.

More recently, death has been attributed to the curse of the totem pole. A documentary was filmed about Livermore's history, and, of course, what's Livermore's history without featuring the cursed totem pole? It was featured in the documentary and not only was Nordwall interviewed, during which he reiterated that he had not lifted the curse, but also interviewed was a former city manager and a prominent city resident. Both the former city manager and the prominent resident, according to the story, died a few weeks after the documentary was released! Victims of the curse? Or just coincidence?

Adam "Fortunate Eagle" Nordwall was also very involved in a variety of Native American protests. For example he was the chief architect of the Native American occupation of Alcatraz Island from 1969 until 1971. Also in 1973, he "discovered" Italy. He showed up in Italy in full tribal regalia, and announced in the name of the American Indian people that he was taking possession of Italy "by right of discovery" just like Christopher Columbus had done. 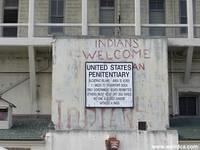 The Indian Occupation of Alcatraz 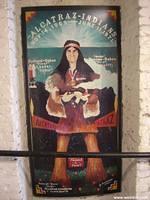 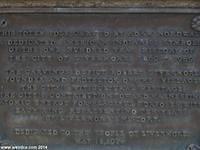 Plaque on the Livermore Totem Pole

The plaque for the totem pole reads thus:

This Totem Pole carved by Adam Nordwald,
a dedicated American Indian, is symbolic
of the One Hundred year history of
the City of Livermore, 1869-1969

The carvings depict Robert Livermore,
founder and protector of the village,
the city's contribution toward harnessing
atomic energy for peaceful purposes, with
each ring representing ten years
of Livermore History.