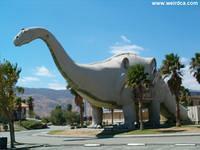 Dinny the Apatosaurus stands out in Cabazon

If the stories are true, Claude Bell, when he was a child, visited Lucy the Elephant in Margate, New Jersey. Lucy was an enormous elephant with a few rooms inside her located on the shores of New Jersey. Presumably, Lucy was the inspiration for Claude Bell to build his dinosaurs out in the desert of Cabazon along Interstate 10. In 1964, when Claude Bell began construction on the first of his dinosaurs there probably wasn't much in Cabazon. But today the dinosaurs are neighbors with the Moronga Native American Casino. 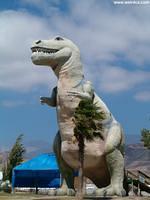 Say hi to Mr. Rex, the T-Rex in Cabazon

It took Bell, a former Knott's Berry Farm sculptor, eleven years and over $250,000 to finish Dinny the Apatosaurus. Dinny is one hundred and fifty feet long and forty five feet high. Bell built her with an entrance in the tail, stairs leading up, and rooms inside including a large gift shop on the main level. She also has a small bathroom, a room with a sink, and another room about a third the size of the gift shop. A tunnel up to the head also exists to allow for changing of the lights in the dinosaur's eyes.

After Dinny, Claude Bell began working on a Tyrannosaurus Rex. Rex as he's called is sixty five feet tall. Stairs lead up inside the T-Rex and a room allows viewing the surrounding area from behind the dinosaur's teeth. Originally, Bell planned on placing a slide down the T-Rex's back, but those plans were never realized for Bell sadly passed away in 1988. He had additional plans to build a Woolly Mammoth and rumor has it a Saber Tooth Tiger on the grounds. 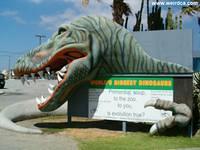 Sign put up by new owners outside entrance to Dinny

The two giant dinosaurs have appeared in a few movies most notably Pee Wee's Big Adventure, some music videos such as Tears for Fears rock video Everybody Wants to Rule the World and even a coke commercial. Rumor has it that the T-Rex at one point had a bathroom built inside it, built at the behest of Pee Wee Herman during the filming of his movie. However, I was unable to find any sign that there had ever been a bathroom inside. The Apatosaurus, as previously mentioned, does have a bathroom inside. 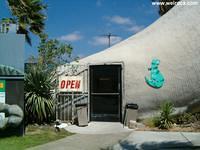 The entrance to Dinny

Originally called "Claude Bell's Dinosaurs", they are now more often called the "Cabazon Dinosaurs", and are now also referred to as the "World's Largest Dinosaurs" by their current owners. Some time by at least 2005, the two dinosaurs were acquired by Creationists. Although originally built with the intent to promote dinosaurs and natural history, evolution is now denounced in the new Creationist run gift shop. Scripture passages are hung throughout the gift shop and creationist pamphlets are passed out with each purchase. The motto, "By Design, Not by Chance" is now spread by the two dinosaurs. The group does plan on adding more attractions to the location such as a fossil dig. It appears that they have already added a large snake and a large turtle on the grounds. For more information on Creationists see the Museum of Creation and Earth History. Also the below website shows off the dinosaurs and both the current owners' religious platform as well as their plans for the site. According to a Los Angeles Times article by Ashley Powers, the new owner, Gary Kanter of Orange County is working with a Pastor Robert Darwin Chiles to turn the dinosaurs "from tourist stop to place of worship". 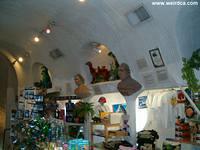 The dinosaurs use to be plainly viewable from Interstate 10, but now a Burger King and another burger joint stand between them and the highway. It looks like you can still see them heading West along the highway, but cruising East, it was pretty much impossible. The original restaurant they were built next to was Claude Bell's own Wheel Inn Restaurant which still stands to the left of the dinosaurs. All of the restaurants and burger joints give great views of the two dinosaurs.

The gift shop inside Dinny the Apatosaurus appears to be open every day. One can only enter Rex on the weekends. It costs $1 for children and $2 for adults.