The Grave of Charlotte Sitton 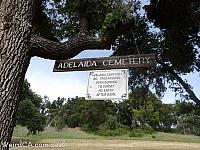 Watch out for your car keys," Tina told us as we unloaded from her husband's car outside the Adelaida cemetery. According to Tina, our guide for our first trip out to Adelaida, the residents of the cemetery like to steal your car keys thus stranding you out in the middle of nowhere. We all dumped our keys inside the car, while Bill and Tina each made sure they had a set of keys to their car. They figured that if things went bad, hopefully, at least one of them would still have their keys at the end.

The legends state that the ghost of Charlotte Sitton wanders the cemetery every Friday night between 10 PM and midnight. She was supposedly the young wife of a minister who committed suicide at the age of 19 in December of 1890. Her child (some stories say children) supposedly died during a diphtheria epidemic and now she leaves flowers on her child's grave late Friday nights. Dressed in a long white nightgown she is said to appear near either her grave or her child's grave. Occasionally she can be seen carrying flowers and laying them on the grave.

Other versions of the story differ slightly placing Charlotte in a long flowing pink dress and colorfully referring to her as The Pink Lady. Yet another story doesn't reference Charlotte by name, and instead simply references a ghostly lady in white who goes around placing flowers on the graves of many different children from multiple families who died of diphtheria apparently around World War I time frame. 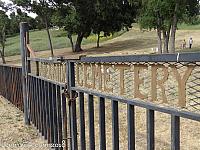 Behind these gates lies Adelaida Cemetery 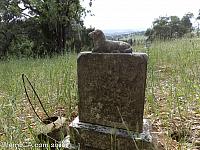 A grave of a child at Adelaida Cemetery 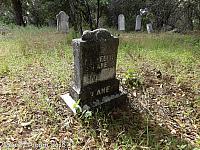 Does the ghost of Charlotte put flowers on this grave? 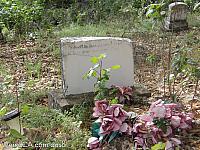 All that remains of Charlotte Sitton's tombstone

The drive out to Adelaida from San Luis Obispo had taken about forty-five minutes. Driving west from Highway 101 through Paso Robles, the roads became winding and slow going. Located west of Paso Robles, Adelaida is now over-ridden with wineries, but still rich in history and the strange. Originally, a mixture of mercury mines, farms, and ranches, Adelaida was first settled in 1859 by James Lynch, a sheep rancher. The population eventually reached a size of seven hundred scattered throughout the area amongst the hills and valleys. The old trail to Mission San Miguel was opened in 1797 and used predominantly in the 1860s and beyond for the shipping of mercury. It is said that the mercury from the mines still runs off into the water supply, causing the wild animals that drink from the pools and lakes to behave oddly, driven crazy or insane from the high mercury content in their drinking supply. Rumors of odd behavior or suicidal actions on the part of the local wildlife are common. This is similar to the "Mad as a Hatter" stories of hatters who would place mercury in their hat bands, which eventually led to insanity. Only the cemetery and the school house around the corner remain of Adelaida. If the history is true, the name for the area came from the first settlers, three families of which each had a daughter named Adelaida - yes I know that seems a bit far fetched. 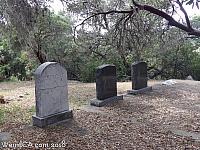 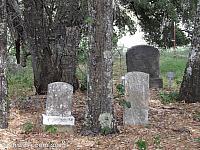 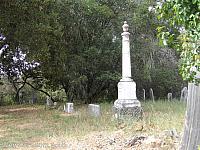 Passing through Paso Robles, Tina entertained us with tales of the local area, including some of the buildings and houses there. After turning left off the highway, she pointed out a house on the corner that according to her is the most haunted house in Paso Robles. The residents of the area, many many years ago use to drive suspected witches out of town to the location where the house now sits. There they would stone and kill the obviously wrongfully accused woman. Now, according to local legend, all of the women's ghosts haunt the house. It was for rent at the time we drove by if you're interested.

Later as we drove through wine country, Tina pointed out an old stone wall. The wall was about two to three feet tall and bordered on both sides of the road. Built completely out of rocks, it was overgrown and crumbling. Long ago, one of the residents of the area hired several people to build the wall, but upon its completion he refused to pay them and instead shot every last one of them.

Eventually, we arrived at the cemetery. The cemetery was started by Wesley Burnett in the late 1800s and is rather large consisting of two separate levels, a lower level and an upper level. The first person buried in the cemetery was Mary K Burnett in January of 1878. She was the wife of Wesley Burnett and her grave can be found in the upper level. The cemetery was incorporated in 1905 around the time of Wesley's death. He is buried next to his wife and the cemetery recognizes him on the back of a wooden sign that hangs from a tall tree near the front gate. Ironically, his grave didn't even have a marker on it until the fall of 2001 when his great granddaughter had one placed on the spot where records showed his grave to be. 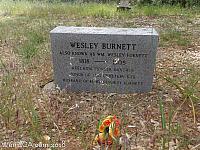 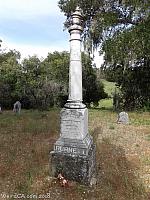 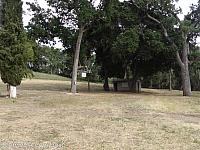 The records of who is buried where are extremely incomplete as over time nature and people have destroyed a lot of the old markings showing the locations of the graves. To make matters worse, the original plat map of the cemetery is rather illegible and even occasionally has discrepancies from the actual site. Little metal flags along with flagstone rocks use to show the graves, but many have disappeared or been stolen or moved. Although it looks like an attempt was made to put the graves in a somewhat orderly row like fashion, grave sites are spread all over the hill side, sometimes randomly in locations off the beaten trail. Such was the uncertainty of where the graves were, that Tina told us to excuse ourselves as we entered the cemetery and to apologize for walking over grave sites she was sure we would be accidentally stepping on.

A rickety sign swinging from chains on a tree greets you with "Adelaida Cemetery". On the back of the sign is a tribute to the donor, Wesley Burnett. We initially took the hill up on the right. As I walked up the curving hillside, I took in the countryside. Little purple flowers covered the area, which I thought was a bit strange since I couldn't recall seeing any of the flowers on the drive up from Paso. The trees loomed above us dripping moss and lichen like cobwebs from their limbs. It if hadn't been daylight I think the walk to the top would have been extremely creepy.

The gate to Adelaida Cemetery

In Memory of Wesley Burnett Donor of This Cemetery Site

To the right of the gate, a small abandoned caretaker's shed sits. On one visit, the word "Kill" was painted on the front. The shed isn't in a great state. Some visitors have reported running across what may be a caretaker ghost or hearing heavy footsteps pursuing them near the shed. Shadowy figures have also been seen lurking around the shed. If these stories are true, it seems the cemetery is haunted by more than just Charlotte, and she might be joined by at least one other ghost, one who patrols the cemetery possibly still taking care of its grounds. 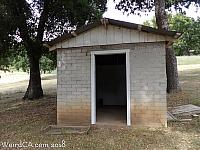 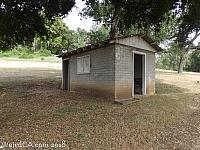 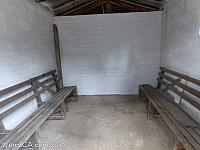 Adelaida Cemetery is rumored to have a lot of spiritual activity including a bleeding tree. The cemetery itself gives off an odd feeling even during the day and attracts a lot of unusual people to it (I myself during one daytime visit ran across a strange couple hanging out outside the gate in a pick up truck. They did everything that the stereotypical creepy guy at the beginning of a horror movie does except literally scream "You're all gonna die". They were gone before some friends of mine arrived a few minutes later). Signs of grave tampering were also evident one of the times I visited. Vandalism is also sadly a problem with the site. Although pictures here show Charlotte's gravestone, albeit broken, the last time I visited, it was completely missing and gone, only the bottom part sadly remained. It is a shame that visitors have both broken her tombstone and now stolen it. Additionally, I've seen a noose hanging from a tree in the upper area of the cemetery, apparently someone's idea of a sick joke. 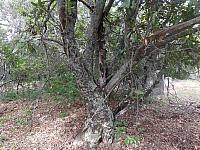 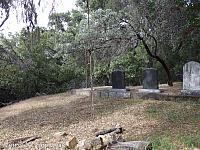 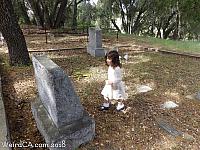 Further down the road is the haunted Lincoln Adelaida School and beyond that the old mercury mine. It should be noted that both the school and cemetery are on private property. The school is only open for special events. The cemetery is only open during daylight hours. Being in the cemetery after dark is trespassing and occasionally the county sheriff does patrol the area. This website does not encourage trespassing, nor does it condone vandalism. Please be respectful of the property and those interned within when visiting.