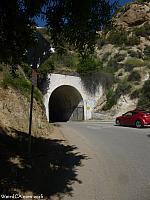 How do you get to Toontown? Why through Griffith Park!

At 4,210 acres, Griffith Park is one of the nation's largest parks. Located within the park is the Griffith Observatory, the Greek Amphitheatre, the Los Angeles Zoo, the Museum of the American West, the Travel Town train museum, two golf courses, a merry-go-around, countless hiking and horse trails, the Haunted Hollywood Sign, the Batcave, a few ghosts, the entrance to Toontown, and an old 1863 curse.

Griffith Park is named after the strange Griffith J. Griffith whose first and last names were indeed the same. After trying to run a failed ostrich farm in the area, he donated over 3,000 acres to the city of Los Angeles in December 1896 in order to avoid the curse on the land. A curse laid down by the blind niece of one of the original land owners.

In addition to the deadly curse, the park has multiple spirits supposedly haunting it. Don Antonio Feliz, one of the original land owners, has been seen ghostly riding his horse, haunting the land particularly during bad storms. He also crashed a party in 1898, supposedly scaring the well to do of Los Angeles.

That same blind niece that laid the curse has been seen in multiple locations through the park, including riding a white horse and lurking around the park rangers' headquarters.

Another ghost girl has been seen wandering the park looking for help. She is believed to have died from exposure after having been abandoned. Another ghost walks up the steps of the Merry Go Round. And the ghost of Peg Entwistle lurks around the Hollywood Sign. Also, in what may be a hoax story, there's rumored to be two ghostly lovers haunting a crushed picnic table.

The former Los Angeles Zoo or the Griffith Park Zoo still has its cages and enclosures lurking within the park for people to explore. Located where Griffith J. Griffith use to have his ostrich farm, much of it now is covered in graffiti, while other parts have been turned into a picnic area.

With Hollywood being so close, it's only natural that several movies and TV series have been filmed within the park. For example, both the 1960s Adan West Batman kept the entrance to the Batcave in the park and the movie Who Framed Roger Rabbit also placed their entrance to Toontown near the Griffith Observatory. And speaking of Griffith Observatory it was famously used in James Dean's Rebel without a Cause which is commemorated by a bust of the famous actor outside the observatory. The aforementioned zoo also had scenes of Will Ferrel's Anchorman filmed in it.