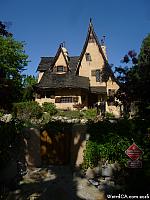 The Witch's House lures in small children in Beverly Hills 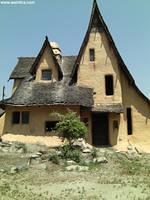 House during reconstruction many years ago

Nestled on the corner of Walden and Carmelita in Beverly Hills, sits The Witch's House, more formally known as The Spadena House. The house is a perfect example of Storybook style construction which involves various whimsical building elements often seen in structures found in fairy tales or old stories. These elements range from castle turrets and towers to cottage style roofs.

It was relocated to Beverly Hills in either 1926 or 1934, and since then has been the subject of many urban legends including: a story stating that it was built for a movie version of Hansel and Gretel, a story stating that it was built by a Snow White and the Seven Dwarves fanatic, and a story that states the owner use to dress up like a witch on Halloween to give out candy (which is highly possible and rumored to be the source of the house's name). 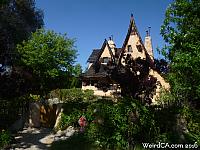 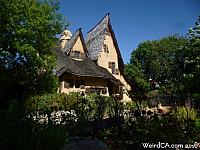 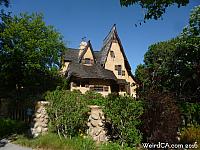 A few years ago, the house underwent major restoration as the current owner named Michael Libow is trying to preserve the whimsical structure. His remodel also included the interiors of the house as well. Libow is the third owner of the structure and he acquired the house and land for 1.3 million in 1998. The house currently has a beautifully landscaped yard complete with gnarled trees and other fairy tale elements. There is a moat complete with a bridge for crossing. The moat even has a guardian alligator lurking in it. Originally, the house supposedly had a wishing well and a miniature mill as well, but I didn't see those structures when I last visited in 2016.

The house has also made a cameo appearance in the movie, Clueless, starring Alicia Silverstone. The Clown of North Hollywood is another famous location in that movie. 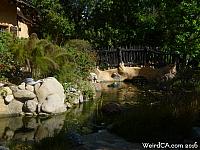 Moat and Bridge, along with alligator 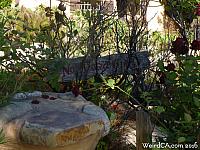 No Trespassing . . . or the witch will cook you in her oven! 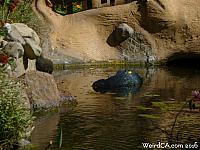