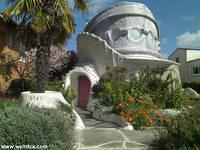 Berkeley is home to the strange looking Fish House!

In Berkeley on Matthews street sits a 2000 square foot house built back in the early to mid nineties that looks a lot like a fish. The Berkeley Fish House was based upon the world's most indestructible living creature, the Tardigrade. A Tardigrade is a small, water dwelling animal with a segmented body and eight legs. They typically range from 0.012 to 0.02 inches in length and are able to survive in some of the most hostile of environments such as -459 degrees Fahrenheit and 304 degrees Fahrenheit. They also can survive 1000 times more radiation than other animals, a decade without water, as well as several days in low earth orbit exposed to the vacuum of outer space.

The house has four bedrooms, three bathrooms, two stories, appears to have a one car garage, and no stairs (it's all ramps). It has been called the world's safest house and is suppose to be flood proof, fire proof, termite proof, more resistant to earthquakes, and even reduces sound by fifty decibels. The walls are made of recycled Styrofoam and cement block called "Rastrablock". The house's design also lends itself to be cool in the summer and warm in the winter. 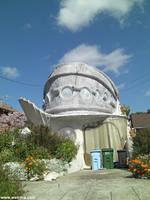 The Fish House is fire resistant.

The exterior walls are curved and also angled inward at four degrees. The angling creates more resistance from earthquakes. The curved portion of the walls deflects and accelerates wind around the structure. This helps reduce the chance of fire, preventing fire from sticking and clinging to the house's surface. Additionally there are four water jets that will immerse the exterior of the house in the event of a fire. The house is virtually fire proof from the outside. Additionally the ground level is three levels below grade to provide better insulation.

The house also goes by "Ojo Del Sol" or Tai Yang Yen, which means the Sun's Eye and originates from the fifteen foot diameter eye like window that faces south.