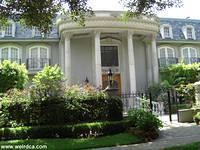 As many as three spirits could lurk within!

Clifton Webb was the original "Mr. Belvedere" in three different movies released between 1948 and 1951.

Clifton Webb's ghost is rumored to haunt his old house in Beverly Hills. Even while alive, Webb believed that his house was haunted by a ghost, and after his mother died, he believed that her spirit moved in as well. So if you add in Webb's own spirit there could be as many as three different ghosts residing within this Beverly Hills house.

Webb's ghost frequents a few other locations as well. Webb who died in 1966 is buried in Hollywood Forever Cemetery. His ghost apparently haunts the Abbey of the Psalms mausoleum. Strange lights, drafts of cold air, smells of cologne, and whispered voices have also been reported coming from or in the mausoleum.

He also has been reputably haunting an old throne like chair that he gave to his long time friend and psychic Dr. Kenny Kingston. The chair occupies a place of honor in Kingston's home, surrounded by velvet ropes. Kingston reports that the chair has moved multiple times during his séances. It also apparently loathes having women sit in it, forcefully ejecting them from it if possible.