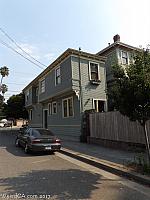 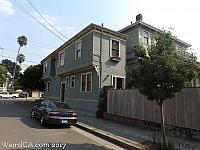 Alameda is home to quite possibly one of the narrowest spite houses in the country! A spite house is a house or structure built to get back at, annoy, defy, or outright anger a neighbor or city. They are usually built on small or strangly shaped plots of land. This generally means that the house or structure built on the land is weirdly shaped itself, the most common spite house being a super narrow, yet tall building. In addition, they often block views, light, etc. to the neighboring building.

Enter Charles Froling of Alameda who had inherited some land on the island and planed to build a dream home. That is, at least, until the city stepped in, and, with the support of a neighbor, took a large portion of his land to build Crist Street. So Froling, using the small, narrow parcel of land that he had left, built a ten foot wide, fifty-four foot long, twenty foot tall spite house! The front-facing second story overhangs a bit in order to give more space to the upper floor. The back of the house is a simple windowless wall, built as close as property lines would allow to the neighbor that supported the city taking Froling's property.

And if you don't believe the house was built out of spite, just look above the front door, where it literally says "Spite House". The house, even after 100 years, still has people living in it, and is much embraced by Alameda for its history and story. Luckily, most modern day building codes prevent most future spite houses. 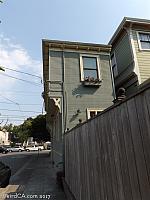 Look how close the Spite House is. 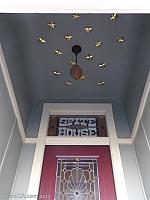 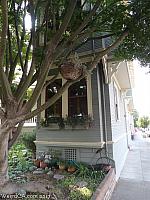 The other end of the Spite House