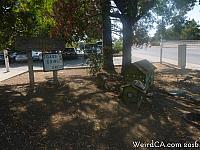 Toad Hollow and the Toad Tunnel in Davis

Ever play Frogger? Back in the arcade or on the Atari? Did you eventually get squished by a passing car or truck? Well toads were also playing Frogger in the town of Davis, and sadly getting squished. Thus, the town was looking for a way to help the small amphibians get across Pole Line Road over to the nearby wetlands area without getting run over. They built the Toad Tunnel. Actually several tunnels under the six lanes of Frogger.

The project, costing $14,000, was lumped into an overpass that was being built for Pole Line Road, and they broke ground on May 7th, 1995. The Tunnel formally opened on August 28th, 1996. The Post Office, which one end of the main tunnel opened up next to, set up Toad Hollow outside the tunnel opening. Toad Hollow is a comical set of building for the toads. One is a toad hotel. The second building is a toad bar called Toadwerks named after the Sudwerks Bar and Brewery that is next door. There is even a small toad outhouse. Cartoon toads can be seen in several of the windows doing a variety of things. 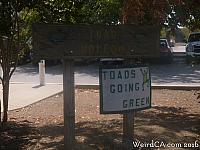 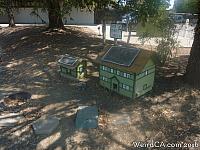 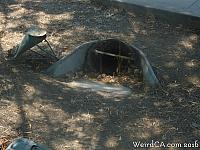 Entrance to the Toad Tunnel

Who do we have to thank for these tunnels for toads and this town devoted to amphibians? Why the former mayor, Julie Partansky. Mayor Partansky was also known for wanting to not fix downtown alleyways filled with pot holes, but instead wanting to declare them historical leading to people saying "Save the historic potholes!" She also planted fruit trees on public property in order for the homeless to be able to eat them.

There is a lot of debate on if the toads even use the tunnels. Supposedly the tunnels were lit by lamps at one point in order to encourage the toads to use them, which resulted in a few fried toads. Apparently birds also will gather at one end waiting for the tunnel using toads to exit. But ultimately it appears that the amphibious residents of Davis do not in fact use the former mayor's tunnels. Still, we get a neat "solar powered" toad town to stop and look at for a few minutes while visiting the post office. 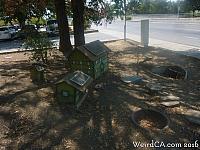 Toad Hollow and the Toad Tunnel 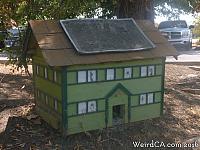 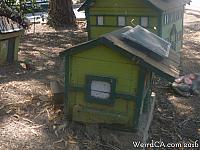