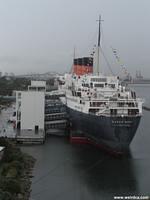 The Queen Mary is permanently docked in Long Beach.

The Queen Mary is a ship docked in Long Beach that is rumored to have lots of spirtual activity.