The Corpse of Elmer McCurdy

On October 7th, 1911, the not famous, the not successful, and the not rich outlaw, Elmer McCurdy was gunned down by a posse shortly after he robbed a train of approximately $46 and two jugs of whiskey in Oklahoma. It's quite possible that he had already consumed the whiskey by the time the posse caught up with him.

In December of 1976, a Universal Studios camera crew filming a scene at the "The Laff in the Dark" funhouse at the Pike Amusement Park in Long Beach discovered Elmer's body. How McCurdy's corpse traveled half way across the country to end up in Long Beach and the events that took it there make up quite a strange story.

Elmer McCurdy wanted to be a big outlaw and to accomplish this goal, he assembled a rag tag gang. In March 1911, the gang robbed a train in Kansas, obtaining a pathetic amount of money. Elmer McCurdy's crime wave continued until the aforementioned train heist in October mentioned above. In between the two train robberies, it is rumored that the gang pulled some other minor heists, but any records of their actions have been lost over the decades. Regardless of what crimes they performed, they were not the legendary outlaws they wished to be, and in fact were quite the opposite. In an ironic note, it is believed that they just barely missed holding up trains carrying large payrolls and valuables.

After McCurdy was gunned down, his body went to the local undertaker in Pawhuska, Oklahoma, who naturally embalmed the corpse using an arsenic solution. Since he was very proud of his work, and no next of kin had yet arrived to collect the body, the undertaker put the body on display allowing the locals see it for a nickel a piece. Rumor has it that the nickels were placed in Elmer's mouth and later collected by the undertaker. The undertaker named him "The Bandit That Wouldn't Give Up".

Elmer's Career as a Criminal

3/23/1911 - train robbery, Elmer attempted to crack the safe with nitro, but used too much. The explosion threw the safe door across the train car and through the side of the car. The nitro also melted the $4000 in silver that had been contained in the safe, lodging it into a lump in one corner of the car. The robbers managed to extract $450 worth.

9/21/1911 - bank robber, again Elmer used too much nitro on the safe door, making such a large and noisy explosion that the entire town was woken up. However, it did not destroy the inner door of the safe. Before the authorities showed up, the robbers managed to escape with $150 of silver and gold coins.

10/4/1911 - train robbery. The gang this time held up the wrong train, one with very little money, and made off with about $90 or so dollars, whiskey and some other items.

In 1915, two men arrived at the undertaker's claiming to be the brothers of McCurdy. In reality they were carnival promoters who wanted to add the corpse to their traveling show. Elmer went on tour throughout the country as an attraction with a carnival known as "Great Patterson Shows". He was often displayed as the same "The Bandit Who Wouldn't Give Up" or "The Famous Oklahoma Outlaw" and even occasionally just as an ancient mummified cadaver. After his time in the carnival, he apparently turned up in an amusement park's haunted house near Mount Rushmore, then to a crime museum in Los Angeles, before moving to the Hollywood wax museum in 1971.

While residing in the wax museum, it is rumored that he was put on display in an open casket ironically next to Bill Doolin, an actual famous Oklahoma outlaw. It is even said that while Elmer was located at the wax museum, a purchaser of wax dummies refused to buy him, claiming that Elmer did not look real enough. McCurdy supposedly then did some time in a few low budget films before ending up as a prop in the Pike amusement park's funhouse for over four years. 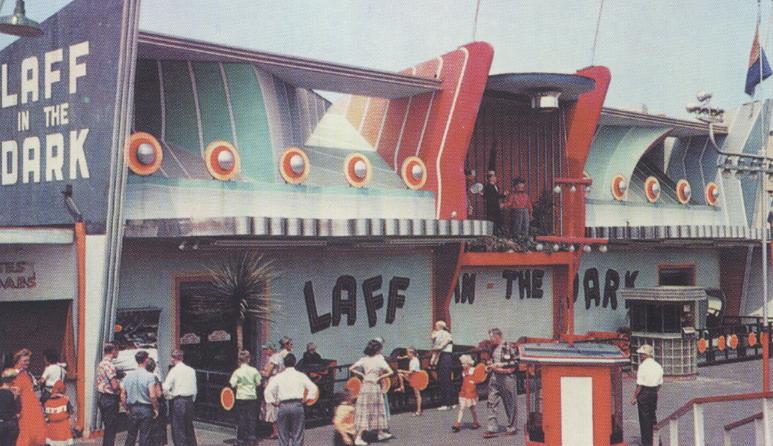 The Pike or Nu-Pike as it was called post World War II began as a beach and bath house resort in 1902. It eventually became one of the most popular amusement parks on the west coast and was filled with arcades, rides, roller coasters (most notably the wooden roller coaster, The Cyclone Racer), hot dog stands, a fifty foot ferris wheel, shooting galleries, and even a Ripley's Believe It or Not side show. Sadly the Pike was unable to keep up with newer amusement parks like Disneyland, Knott's Berry Farm and Sea World and ended up closing after Labor Day in 1979. The Laff in the Dark was a walking tour through a funhouse / haunted house with wax figures, skeletons, ghosts, etc.

It was in the amusement park that it was finally discovered that Elmer McCurdy was in fact a real corpse as opposed to a wax fake. The discovery was made when a film crew for the television show, The Six Million Dollar Man, was preparing to film a few scenes for an episode called "Carnival of Spies". A worker apparently moved the "hanging man" which caused one of its arms to fall off revealing bones inside what had been previously thought to be a fake prop. Medical examiners and forensic experts determined that McCurdy had been shot by a bullet and approximated the manufacture date as the early 1900s from the half copper jacket that was still in the body. Further evidence about the identity of the corpse was gathered when they discovered stuffed inside Elmer's mouth a 1924 penny and a ticket for the "Louis Sonney's Museum of Crime" formerly on 521 S. Main street, Los Angeles. It didn't take long to locate the former owner's son who identified the corpse and explained how his father would charge a quarter for people to see it.

Elmer McCurdy's identity was finally discovered by April 1977 using a method called "medical superimposition" where they overlaid photos of McCurdy with X-rays of the mummy. Elmer was finally buried in Summit View Cemetery in Guthrie, Oklahoma almost sixty six years after his demise with the town residents giving him a parade ride to the cemetery. His tombstone reads:

Cement was poured over the coffin in order to make sure Elmer never went wandering about the country ever again. Ironically, he's supposedly buried next to that real Oklahoma outlaw, Bill Doolin.

So despite a pretty pathetic career as a criminal, Elmer McCurdy found fame touring the country for decades after his death.