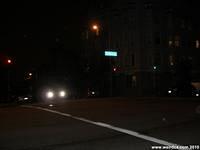 In San Francisco's Nob Hill, between Jones and Powell on California Street, roams the ghost of a teenage girl named Flora Sommerton. In 1876, at age eighteen, her parents at a formal dance announced her betrothal to an older man. She fled from the scene and was supposedly never seen again. Some stories state she fled on her wedding day instead of the date of the announcement. Her parents were rumored to put up the huge sum of $250,000 for her return, but this sadly only led to con artists, trying to swindle the family.

Supposedly, several years later (some stories say fifty in 1926) her body was found in Butte, Montana. She was apparently working as a housekeeper under the name Mrs. Butler. The room she was found in was filled with newspaper articles reporting her disappearance and even stranger at the time of her death, she was wearing the same 19th century white ball gown complete with thousands of tiny crystal beads that she had fled San Francisco in. The family had her body brought back to San Francisco and buried in the family plot.

Now a days, many people have seen the ghostly figure of a young girl walking up and down California Street where she lived. She does not appear to interact with anyone and seems oblivious to the people and things around her. Flora is always wearing the flowing, white gown, though.