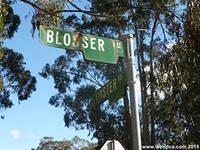 A ghostly gray white lady haunts the corner of Foster and Blosser in Santa Maria!

There on moonless nights, when the infamous Santa Maria wind is blowing hard, people sometimes believe they hear ghostly moaning. The local legend states that a woman was murdered and her corpse buried amongst the eucalyptus trees growing here.

Now her ghost wanders the area, stalking the two roads and the lands around them. What does she want? Who murdered her? Why does she haunt the location where she's buried? No one is certain.

But people have caught glimpses of her, appearing grayish white, walking along the road, disappearing behind a eucalyptus before you can catch up to her. Others have reported her showing up in the backseat of their cars as they drive along the roads there. When they see her in the rear-view mirror, she cackles, laughing at the driver, before mysteriously disappearing.

Since Pioneer Park was built near the intersection, her ghost has been seen there as well, her outfit being described like a wispy robe. People have reported hearing her scream in the middle of the night while they have wandered the park. They try to catch up to her, but she eludes them, losing them somewhere in the darkness of the park.

So if you're done staying the night at the Santa Maria Inn, why not take a drive out to the outskirts of Santa Maria and pass by Pioneer Park at the corner of Foster and Blosser. There under the canopy of the eucalyptus trees, on a moonless night, when the winds are howling fast and furious, you might just run across her. 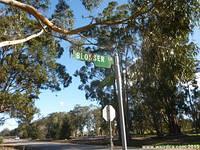 The corner of Foster and Blosser 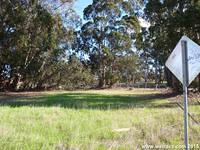 On moonless nights, a white lady ghost haunts this area. 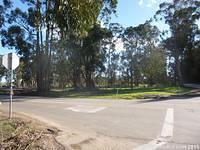 Under the eucalyptus and often in Pioneer Park, one can find the murdered spirit.