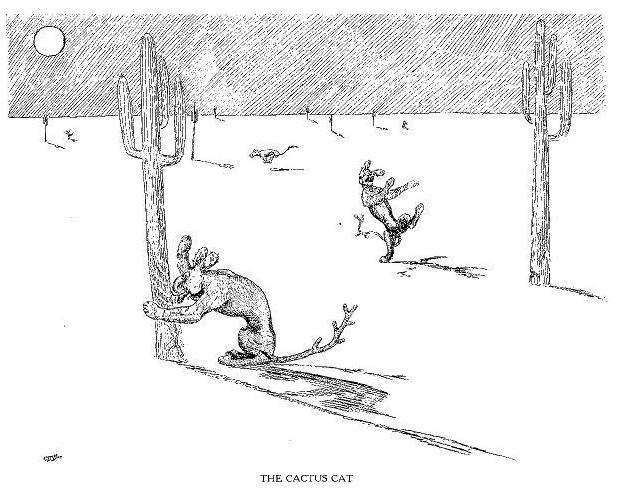 Back in the 1800's, frontiersmen and cowboys spoke of a strange creature stalking the deserts of California, Arizona, New Mexico, and the rest of the Southwest. This strange creature is the cactus cat. The cactus cat is slightly larger than a normal household cat, standing maybe two feet tall at the shoulder, but is covered with thorn like hair, has sharp bones on its front legs, and a branched spiky tail. The barbs on its head are further clustered into small horn-like rigid parts behind the ears.

The cactus cat survives by eating the sap of common cacti found in the deserts where it lives. It uses the sharp blade like bones on its front legs to slash open the cacti and feed off of the sap inside. Unfortunately for the cactus cat, often this sap ferments and intoxicates the cat with its sweet alcoholic-laden substance. The cat will then stumble off drunkenly through the desert in an alcoholic haze.

Cowboys and other frontiersmen reported hearing the cactus cat at night, wailing in the darkness, and occasionally rasping its bony arms together. If the stories are to be believed, a cactus cat would even occasionally attack humans, drunkenly streaking into campsites, leaving large welts from its barbed skin as it lashed out at the campers.

As funny as it would be to have an alcoholic cat exist, it is rather unlikely that the cactus cat truly exists and obviously sightings of such a feline are few and far between. Its creation is probably the result of tall tales told by travelers in the desert who were dealing with the bizarre look of porcupines and the terrifying sound of pumas screaming through the desert night.