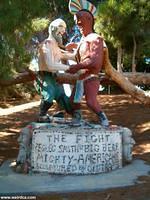 If you cruise around to the back of Pierce College in Woodland Hills, over by the stables down the back entrance and along a badly in need of re-paving road, you'll find the Old Trapper's Lodge tucked practically out of sight in this remote area of the school. Most of the students probably don't even know it exists and the administration fully admits that they don't pay for the location's upkeep. What is the Old Trapper's Lodge? Why it's several statues and folk art depicting aspects, myths, tall tales and stories about the old west built by the Old Trapper himself, John Ehn.

John Ehn was born in 1897. Before moving to California, he was a trapper, but upon moving to the state, he opened up a motel in 1941 near the Burbank airport at Arvilla Avenue and San Fernando Road. The motel had western memorabilia in the office including old weapons and animal pelts. In order to attract more attention to his motel, called appropriately the Old Trapper's Lodge, Ehn decided to have a sculpture built on the site. If you believe the story, he originally hired Claude Bell, then of Knot's Berry Farm, to build the initial sculpture. Claude Bell would obviously go on to build the giant dinosaurs of Cabazon. 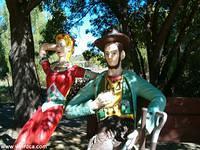 Just two of the many colorful characters at Old Trapper's Lodge

Supposedly, after watching Bell sculpt for three days, Ehn figured he was now a proficient sculptor and in 1951 off he went, building the multitude of statues today found on Pierce College. For the next thirty years until his death in 1981, using his self taught knowledge, John filled the front yard of his motel with folk art, by sculpting a variety of statues depicting myths, tall tales, and apparently personal experiences from the Old West. The statues feature cowboys, cowgirls, Indians, miners, saloon girls and other personages from the old west. John used the likeness of his family to create the statues. He also built his own version of a "Boot Hill", a mock cemetery of colorful and at times humorous tombstones. 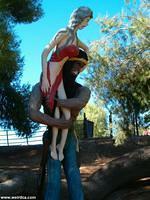 The entire site became California Historical Landmark Number 939 in 1985. Around that time, the land the motel was on had been sold to the nearby airport. The motel was sadly torn down, but luckily most of the statues and other folk art were saved and transferred to Pierce College in Woodland Hills. Now the area near the Animal Sciences Building is filled with strange faces peering out from the ground and bizarre scenes of the old west. One sculpture shows Peg Leg Smith squaring off with Big Bear, a Native American. Peg Leg Smith was a mountain man, a prospector, and a spinner of tall tales, who lived from 1801 to 1866. Another sculpture entitled "Kidnapped" shows a Native American kidnapping a woman. Others show other fanciful characters such as Lonesome George.

No one at Pierce College will say who allowed the historical folk art to be hosted at the community college. Nor will they admit to who performs maintenance on them. Every few years though, someone shows up and touches up the paint jobs on the colorful statues. The grounds and trails are also occasionally fixed up also by these mysterious caretakers. All the college seems to care about is that they don't pay the upkeep cost. While it seems the historical landmark receives little attention from any one else in the outside world, particularly from the students who seem for the most part unaware of its existence, someone else takes a keen interest in continually maintaining these wonderful works of the past. Who this is, we don't know. Regardless, the Old Trapper's Lodge is very much worthy of a visit.

Take 101 North (or 101 West) to the Winnetka Avenue exit in Woodland Hills. Turn Right and go past the college to the next light, make a left and go to El Rancho Drive. To get to the sculptures enter the campus from El Rancho Drive. The Old Trapper's Lodge will be on your left, just past the horses.

Old Trapper's Lodge is one of California's remarkable twentieth century folk art environments. It represents the life work of John Ehn (1897 - 1981). A self-taught artist who wished to pass on a sense of the old west, derived from personal experiences, myths, and tall tales. From 1951 to 1981, using his family as models, and incorporating memorabilia, the "Old Trapper" followed his dreams and visions to create the lodge and its "Boot Hill". 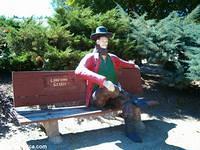 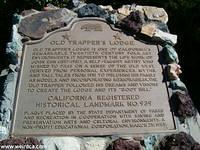 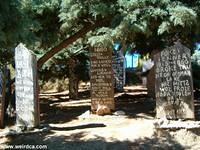 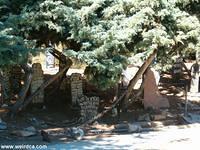