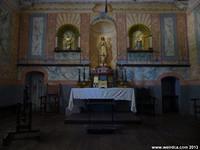 The alter at Mission La Purisima