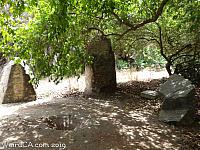 On the northern part of Presidio Park, accessible by an access drive up the hill off of Taylor Street, is an area called Inspiration Point (although Google Maps seems to call it Presidio Point, and I've also seen it called White Deer Park). It doesn't look like that much. There's a parking lot at the end of the access drive at the top of the hill, with some pretty nice views. Off the parking lot is a fairly large open space / lawn area that slopes up the hill. However, when you get to the top of the lawn area, off to the right, there's a strange monument. A monument to the white deer of Mission Hills. 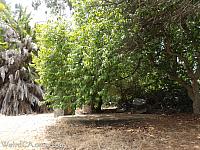 The monument consists of a circular slab of concrete that has a watering hole in the middle. Tracks of deer are set into the slab. On the top edge are three native rocks of various sizes and a plaque. The three stones were carved by San Diego artist, Charles Faust. The entire monument is all nicely covered by nearby trees and is fairly easy to miss if you aren't really looking closely. The watering hole was empty when I was there. All in all, a very tranquil spot. I've heard the lawn area is occasionally used by weddings and events, but when I was there, the entire Presidio Point area was pretty much empty, with the exception of one couple that we briefly ran across. 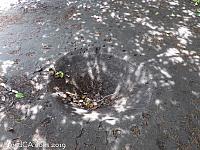 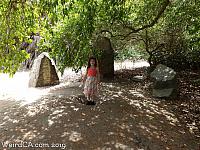 So why is there a random monument to a white deer in the upper corner of the park at Presidio Point? Well, there's lots of urban legends and stories surrounding the monument. Supposedly back in the sixties a female white fallow deer escaped from the San Diego Zoo. Of course, the zoo claims that they were not missing any deer. Another, less believed story has the white deer as a pet of a rich, eccentric woman who died, leaving the deer to slowly go hungry, and jump the wall of the woman's estate. And a third story sort of combines the two with the white deer having been a San Diego Zoo resident, but due to overcrowding the zoo sold her to a rich family in Mission Hills, from which she escaped. Regardless, the white deer roamed the area around Mission Hills from 1965 to 1975, and residents of San Diego enjoyed looking for her white coat as they walked or drove nearby. People often left her fruit or other food in the park she was commonly seen in. She was named Lucy and according to one legend is supposedly buried under the monument. For the more than ten years she roamed the area, she was beloved by the locals, and acted sort of as a mascot for the local area. But, in December of 1975, park rangers or perhaps animal control apparently got worried for Lucy's safety after she was seen trying to cross a nearby highway; one report even mentioning that she might have been hit and injured. The rangers decided to capture her, and used a tranquilizer dart which instead of knocking Lucy out, sadly killed her. The monument came in 1976.

The white deer of Mission Hills

Bliss in solitude beneath this tree
formless, silent, spirit free. And of course, now the ghost of Lucy, the white deer haunts the area around her monument and at times, she has been seen throughout Presidio Park. The most common times that she appears is at dusk and very early in the morning. She has supposedly been seen as a complete and normal looking white deer, but also as a misty version of a deer. She has made rustling noises in the growth of the park, and moved bushes and plants when there is no breeze. It seems that even after more than four decades, Lucy is still wandering the park, haunting the area which she called home in life. Memorial Bench (on left) and Monument (on right) 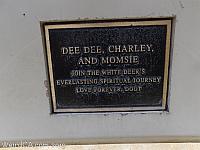