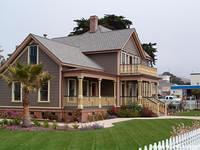 Captain Cass's House in Cayucos down by the Pier

The small beach town of Cayucos is located just south of Cambria and Hearst Castle. The town was founded as a shipping port in 1867 by Captain James Cass, who had earlier left his New England home, sailed around the Horn and settled in Cayucos on 320 acres of the Rancho Moro Y Cayucos Spanish Land Grant. Captain Cass built his house that same year and with his partner, Captain Ingals, built the pier, a store and warehouse known as Cass' Landing. The pier still exists, and the warehouse has become a community center that is available for public and private parties. Captain Cass's house has in recent years undergone massive renovations, but it is said that the good Captain still wanders his house.

According to the rumors, the ghost of the Captain has been encountered in the back of the house, mostly in the music room, where occasionally music has been overheard despite the absence of any musical instruments.

The only concrete record of any spiritual activity that is rumored to exist is from the Captain's niece's diary. In it she supposedly wrote about an incident that occurred shortly after the Captain passed away. Apparently her and her husband entered the house one night and encountered a music box that utilized metal discs with holes in it. From the account in the diary, the music box started up on its own accord and the couple fled the house immediately in terror. The niece also writes about the house's water tower, stating that in the room beneath the water tank, several glass jars were stored. The niece writes that she was sorting through the jars one day when she discovered one containing pickled human fingers.

According to Hauck's "Haunted Places - The National Directory" the house is located at 1654 Ocean Avenue. This appears to be incorrect. The house in the photographs is down by the pier, I believe located at 222 Ocean Avenue, and has been meticulously restored over the past few years. It is still on Ocean and is the former house of Captain Cass.

During renovations, apparently workers' tools went missing and unexplained sounds came from the house. Additionally, at times dogs have refused to walk by the house and people have seen a man's shape on the side of the house only to have it immediately disappear.