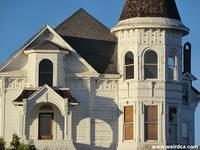 Once a sanitarium, the Coffee Rice House is haunted by unwashable blood stains!

Now surrounded by a mobile home park, the Coffee Rice House in Oceano was built in 1885 by the same architect who built the Pitkin-Conrow House in nearby Arroyo Grande, just a few miles away. Although now its entire front area consists of the mobile home park, the estate originally had an oval driveway, extensive grounds including trees and a sundial, a racetrack, a pillared entrance way and additional buildings on the property. Now if you were to step out the front door, you would be looking directly at the back of a trailer. 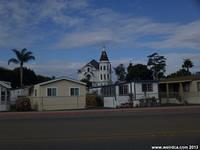 Do the residents of the trailer park know what lurks right behind them, looming up and over their complex? Do they know the terrors that may wait inside? The history of ghosts and ghouls, specters and spirits that haunt the imposing edifice behind them.

The Rice family that lived in it suffered nothing but misfortune. Originally Coffee T. Rice was a wealthy man who came out to California originally to San Francisco from Ohio. He moved down to the Central Coast due to the railroad that was planned to run through the area, purchasing several properties along the railway's right of way. Part of his entrepreneurship introduced celery production to the area. By 1886, his glamorous estate consisting of twenty rooms was complete and was outfitted with marble bathtubs and sinks as well as fireplaces built out of both marble and hand-made Italian tile.

The family lived in the house for less than ten years, as Rice's son was killed in either a riding accident from having been thrown from a horse or drowning in the nearby ocean (accounts differ). After the death of her son, Rice's wife suffered from neurasthenia, a "disease" with symptoms such as fatigue, anxiety, depression, and headaches. It is no longer diagnosed in America, but is still commonly diagnosed in Asia. She died at a young age. Rice's fortune and money dried up, a result of delays in the construction of the railroad. When the train finally came through the area in 1895, Rice had long moved out. 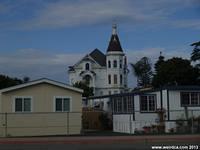 In 1905 the house was acquired by the Temple of the People, a religious organization founded in Syracuse, New York in 1898 which had relocated to Halcyon in 1903. It is often referred to as the Halcyonites. Halcyon is part of unincorporated San Luis Obispo county. Until 1925, the Temple of the People operated the Coffee Rice House as a sanatorium.

Several other residents and owners passed through the place in the following years. In 1959, then owners, the Fowlers purchased the property, performed some remodeling, and added the trailer park in front of the Victorian Mansion. In 1965, it was sold again, and this time the new owner turned the second floor into apartments. The property's history is unclear after this. But today, the trailer park still resides in front of the mansion; access to the Victorian is on 25th street through a rear drive. However, the house is in terrible condition, with several windows boarded up, and extensive repairs needed.

As the house is in such terrible condition, all sorts of stories and legends have popped up through the years. The house is said to be haunted by those who use to live there. And, of course any sanatorium has to have the ghosts of its patients still residing within its walls.

If ghosts aren't enough for you, there are said to be blood stains in the foyer of the Victorian. Blood stains that no matter how much you scrub, they always come back, never disappearing for long. 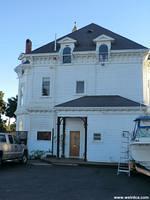 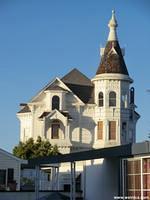 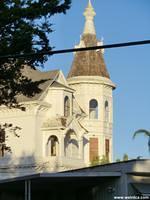