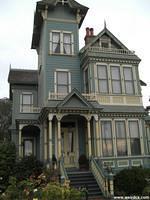 The ghost of a nine year old girl is said to haunt the tower of this Victorian House.

The old Victorian House on Valley Road in Arroyo Grande was built in 1890 by the Pitkin family perhaps as a wedding gift for Charles Pitkin's new wife, Julia Louis Goodwin, who he married in 1889. He was 59 at the time and the family was involved in farming fruits, nuts, and vegetables. Charles didn't get to enjoy the Victorian for very long and died on February 21, 1892. His funeral took place in the house's parlor.

In 1905 the Conrow family moved into the house. Edgar and Abbie Conrow lived there with their four children, Mary West, Clayton, Gwyneth, and Albert. Mary Conrow lived in the house until her death in 1952. In 1957, Ben and Mary Colburn bought the house and added a restaurant to the property. In 1981, Diana and Ross Cox acquired the house, and opened it as a bed and breakfast called the Rose Victorian Inn. In 1994, Crystal Properties consisting of Dona Nolan and Bonnie Royster took possession of the house and renamed it the Crystal Rose Inn. 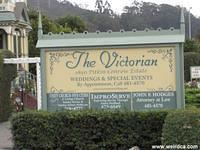 But especially during this time frame, visitors and staff to the Victorian ran across ghosts and stories of the house being haunted began to spread. Enter ghost investigator Richard Senate and his wife Debbie, who visited the bed and breakfast to investigate the stories of ghosts and spirits. Debbie identified the spirit haunting the bed and breakfast as Alice, a nine year old girl who loves cats, was waiting for her mother, and didn't know she was dead.

Alice, described as wearing pigtails, a long dress, and a small apron, has been seen haunting the turret or tower room of the Victorian, often being seen in the upstairs tower room window. Alice is waiting for her mother and often plays with a young male ghost that also haunts the old Victorian. They reportedly play together on the mansion's gabled roof. She is a ghost who laughs a lot, and due to her love of cats, several of the building's resident felines could often be found in the tower room, usually sleeping near the window. It is believed Alice would actually pet the cats. Alice use to follow around one of the cleaning ladies as the woman went about her daily tasks.

How Alice died is a source of speculation, and theories run from her falling out the window of the tower to Scarlet Fever to pneumonia to an allergic reaction from a bee sting. 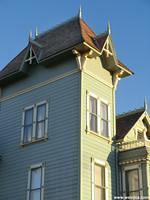 Does a ghost girl lurk in one of these windows?

In addition to following around staff, Alice likes to play tricks on both the staff and guests. She has rung the doorbell on the staff repeatedly, which wouldn't be that bizarre if it wasn't for the fact that the doorbell has had its batteries removed long ago. She has tried to talk over the restaurant's speaker system, but although the staff could tell it was the voice of a young girl, the spirit obviously had issues speaking, and the music soon returned.

Alice has even haunted the guests, invisibly playing tug of war with guests over blankets and pillows in her room. She has gotten into bed with guests, and been heard crying. She mostly hangs around the tower room, and the room the stairs from the tower end at. And when guests have locked the door leading from their room to the stairs up to the tower, she has been heard trying to open the door. The bed and breakfast had a journal in the room, and from past entries, guests explained that the ghost likes the lights on, confirmed that she has tried to get into bed with other couples, and Alice has even been heard calling out for her mother.

Lastly, one guest has reported seeing a greenish white light outside the window of the room and believed it to be the spirit of Alice. Supposedly there is or was a picture of the house from several decades ago. In the picture, a small gray blurry form was visible in one of the upstairs third floor windows. Was it Alice? 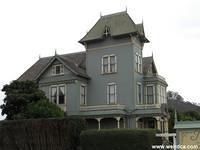 The story of Alice gets muddled however, when one looks into the past of the Victorian house. You see, there is no record of an Alice ever residing in the house, let alone a nine year old Alice. Those who have researched the haunting have been baffled by this detail. Some speculate that maybe Mary Conrow had a daughter. Others point out that research has shown that Gwyneth Conrow has listed a birth date (1894), but no death date has been found for the girl. Is Gwyneth actually Alice?

Who Alice is and where she came from is a mystery. Regardless, in 2000, Melanie and John Hodges took possession of the house. They began fully restoring it and repainted the exterior away from the rose color it had been for the two decades before. The Hodges paid attention to detail and restored the house to Victorian period details, using materials and fixtures that were used in Victorian times. Today it is used for weddings and although Melanie and her husband claim to have never seen nor experienced Alice or any other paranormal occurrences while living there, the rumors and legends still abound. The last ghost story I heard about the house involved a wedding where a staff member turned out to go above and beyond the call of duty and was extremely helpful the day of the merry event. But when guests went to thank the eager staff member, she was no where to be found. When the staff member was brought up to upper management they had no clue who the guests were referring to! Was this wedding visited by a ghost who helped make sure the day went off without a hitch?

So although the house isn't rose colored any more and the current owners deny the ghostly hauntings, the next time you end up there for an event, look up to the third floor for Alice, and pay attention for other spirits helping organize your wedding. 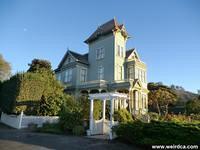 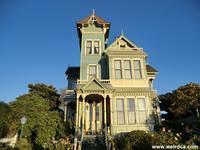 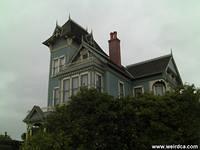