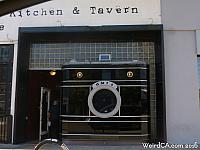 Although it's now on its (at least) fourth restaurant, 5370 Wilshire Boulevard started off life in the 1930s as a photography store called The Darkroom! 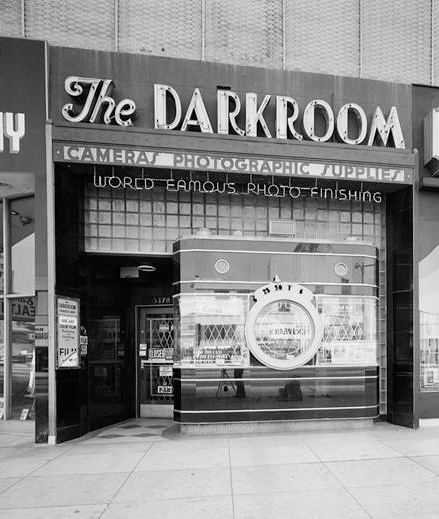 Designed by architect Marcus P. Miller, The Darkroom was a great example of programmatic architecture. The front facade of the store featured a nine foot tall replica of a 35 millimeter Argus camera with a shutter speed indicator, a winder, and dual rangefinders. It was made out of black Vitrolite glass and the center window/porthole (the camera lens) even had a small projector that was said to play newsreels for passing pedestrians. 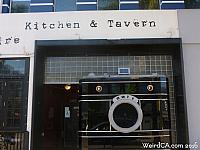 As of 1989 the front facade of the building became a Los Angeles Cultural Historical Monument, which is part of the reason why the series of restaurants endured having a giant camera on their place. Although the facade was protected, sadly the sign above the original store that said "The Darkroom" was not protected. The man who was hired to remove the original sign thought that it should be saved and so he kept it in his studio. Eventually he donated it to the Museum of Neon Art (MONA), although at some point during its time, the sign lost the original "K".

Several theme parks throughout the world have made replicas of the store. Disney theme parks in both Florida and Paris each have a version of The Darkroom. Also Universal Studios in Orlando houses a third replica. All three are photography related in some way.

Another former camera shaped building is the Shutter Shak in Westminster.