The Monster of Elizabeth Lake

There are at least ten different Elizabeth Lakes in California. This one is in LA County near Palmdale and is perhaps the oldest one in the state. Legend states that the Devil himself created the lake and placed one of his own pets inside it. If you swim deep enough, eventually you will find a secret passage direct to the underworld which isn't entirely far fetched, as the lake lies directly over the San Andres fault line. From this lake a horrible monster came to be.

Although there have been no reported sightings since the 1880's, there were a few from 1830 all the way up to 1886. The creature has been described as having bat wings, the neck of a giraffe, the head of a bulldog, six legs, a length of at least fifty feet, and emit a horrible nauseating stench. Several ranchers and owners of land around Elizabeth Lake abandoned or sold their property at losses to get away from the beast. Supposedly Spanish missionaries dubbed the lake Laguna del Diablo and Indian Legend also supports the rumors that the Devil created the lake.

The first sighting was by a Spaniard Don Pedro Carillo in the 1830's. He built a ranch on the shores of the lake, but one day a fire of unknown origin burnt every single structure down all in a single night. In the 1850's, American settlers tried to establish themselves near the lake, but screams at night, unnatural noises, visions, and other experiences that they would not relate drove them away from the fertile soils.

Then came Don Chico Lopez and Don Chico Vasquez. He established an entire ranch along the lake and for several months everything was fine. The monster did not show itself. Then the workers reported livestock and animals disappearing. This was followed by a giant winged shadow passing over the house each and every night. Soon the residents had multiple sightings of the beast. Bullets reportedly bounced off the creature's hide. As ranch hands quit, and animals kept disappearing, the owners were forced to sell. The land was eventually sold and the ranch abandoned.

Miguel Leonis purchased the ranch next. Leonis was a Basque immigrant, a large and burly man who controlled a large amount of land throughout Southern California. He ruled over it like a dictator, and squatters were often severely dealt with through either lawsuits or armed force.

Several months after he purchased the ranch on Elizabeth Lake, the creature began eating his animals as well. But Leonis would not have it. He lay in wait for the beast and then savagely attacked it when it emerged at night. As bullets bounced off its tough hide, he engaged it closer, beating it with his rifle butt across the nose and then punching it in the eye. So taken back by the ferocity of the attack, that the creature retreated back to the lake, and there lay resting, healing its injured eye. Eventually, it fled from the lake heading east towards Arizona. 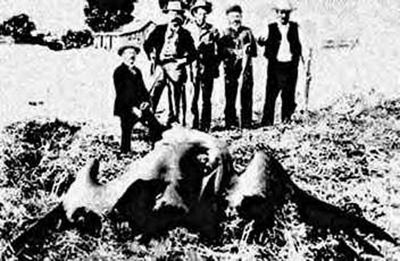 The tale, however, doesn't quite end there. The spawn of the Devil that inhabited Elizabeth Lake has also been linked to the area around Tombstone and the Thunderbird Photograph. The Thunderbird Photograph is a possible picture taken a very long time ago presumably in early 1890 of several cowboys and ranchers holding up what appears to be a pterodactyl. The beast was apparently seen flying in the area, and was lured by some ranchers into a trap in the Huachuca Mountains, west of Tombstone, where they killed the creature. Some stories link the monster of Elizabeth Lake to the monster in the old picture of the pterodactyl, stating that they are the same creature. The picture, of course, also has several stories surrounding it. Scholars aren't even sure if such a picture even exists let alone if it is authentic. The picture apparently appeared in the newspaper: the Tombstone Epitaph and showed several cowboys and ranchers in front of a dead pterodactyl who's wings were pinned to the wall of a barn. The picture soon disappeared.

Regardless of if the creature fled to Arizona, and regardless of if it was killed west of Tombstone, since the day that Leonis beat up the Devil's pet, Elizabeth Lake has mostly been quiet. Speculation has long existed on if the monster did exist. Additionally if it did not exist, no one can draw a conclusion as to why several Spanish dons, American squatters, and wild west ranchers would go to such lengths to avoid such a fertile area.

If the Tombstone story is to be believed, the monster outlived it's attacker, Miguel Leonis, by only one year. Leonis eventually died in a strange wagon accident in 1889. As he wasn't very well liked, rumors of his murder spread afterwards. His and his wife's ghost still haunt the Leonis Adobe in Calabasas.