In 1884, a creature that appeared to be a cross between a plesiosaur and a sea serpent was sighted in the lake at the small town of Lake Elsinore. Since then at least once a decade, the creature has apparently been seen.

Lake Elsinore was named after the Danish city, Elsinore, in Shakespeare's Hamlet. Besides a lake monster, Lake Elsinore is rumored to also have ghosts, UFO's, satanists, vampire cults, and even a group of ten citizens who claim to all have known each other in past lives and have all been mass reincarnated. But the lake monster remains the most talked about super natural aspect of the area.

The creature is colorfully referred to as Elsie, a play on Nessie, and occasionally "Hamlet" after the name of the lake. The lake monster has been taught to local elementary school children, appeared on numerous news reports, been a part of its own local cookbook, and even graced a page in the local phone book. Native Americans have claimed to witnessed Elsie lurking on the waters. Although some people believe that a rupture in the suplphur springs on the north shore of the lake produced a big enough black bulge of mud in the water that it was mistaken for a lake monster. 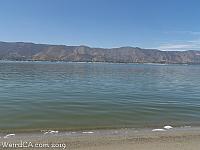 1932 turned up what may have been a hoax sighting as several swimmers were frightened off by what had been a baby sea lion placed in the lake on a prank. In 1934, a C. B. Greenstreet along with his wife and children reported seeing it. He described it as 100 feet long with a thirty foot tail. He also stated that waves as high as light posts washed on the shore in its wake.

1967 saw a family boating on the lake capturing a view of the monster. It supposedly rolled by them making dark high humps in the water. In 1970 the creature was sighted twice by a Bonnie Play. It was described as being twelve feet long and three feet wide with a series of humps and a dinosaur head. After 1970, three state park officials supposedly saw it surface about fifty feet from their craft.

Finally, numerous reports surfaced in 1992. Despite the many documented sightings of Elsie, one big factor rules against its existence. In 1954 the lake went completely dry, and not surprisingly there weren't any beached sea serpents lying on the bottom. In the 1960's it was refilled and since then there has been an ongoing effort to maintain the water level within it. Those who argue Elsie's existence, claim the creature wandered into a nearby cave in the hills and resided there until the lake was refilled. So apparently Elsie can survive on both land and water. 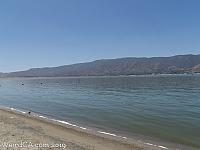 Through the nineties and recent years a fiberglass replica of Elsie has even existed. It was built at 13 feet tall and 102 feet long. Last I heard in 2002 the fiberglass float was still land locked, but its supportes were trying to get it installed on the lake somewhere or failing that turned into a parade float.

Lastly although I've heard speculation of an Elsie Museum at 199 Graham Avenue in Lake Elsinore, one does not exist, at least not at that address. In fact there wasn't even a building at 199. However, I believe that nearby at 201 is an old building that use to be or is part of what was called the Chimes Building. Once the Crescent Bath House a young boy is suppose to have drowned on the site in 1939 and now still wanders the building's halls. Additionally rumor states a murder happened at the location. Mysterious noises, echoing footsteps, and strange cries have been heard in the building. Cold spots have been felt and supposedly a ghost has been seen lurking in the basement.

So is there a sea serpent lurking within the depths of Lake Elsinore? Well speculation is out, but there does appear to have been at one time a fiberglass replica, and currently there does not appear to be any museum dedicated to the missing Lake Monster.