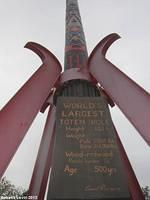 Carved from a single 500 year old redwood, the World's Largest Totem Pole stands 160 feet tall and weighs 57,000 pounds. The base that holds it up clocks in at 214,000 pounds. Designed in 1962 by Ernest Pierson with the help of Johnny Nelson it was erected to celebrate the opening of the McKinleyville Shopping Center.

The top of the totem pole has a thunderbird on it with a wingspan of twelve feet. The right eye is actually a hole in the log and birds have been seen flying in and out of it. Below the thunderbird is a red headed woodpecker, a coyote, a blue jay, a frog, a crow, a beaver, an owl, a grizzly bear, and finally an unknown mysterious face.

In 1984 due to the wood suffering from rot, the totem pole was taken down and fixed up. The carvings were redone and an antenna was attached to the top. After the antenna fell over, the entire totem pole was surveyed again in 1999. The actual wooden pole came in at 144 feet and 8 inches. With the antenna on top it is 159 feet 5 1/2 inches. This makes it the tallest totem pole carved from a single log and it is also the largest totem pole in the world.

Other notable Totem Poles in the world include: 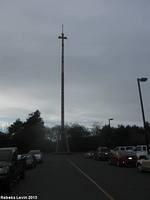 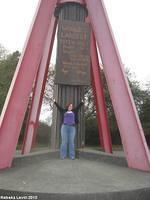