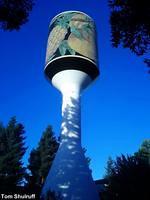 The Libby Water Tower in Sunnyvale

The Libby Water Tower was the water tower and primary source of water for the old Libby's cannery. It still stands in Sunnyvale and it's in the shape of an old fruit cocktail can. The can is 25 feet tall and 15 feet across. It stands about 150 feet in the air.

Although the cannery was torn down in 1985, the water tower was spared. Originally it was a seventies era can, but, it was initially painted over removing the can from the skyline and replacing it with a normal water tower. After public out cry, the can was reverted and repainted back to represent the first Libby's label.

The city has named it a historical landmark. Additionally the Federal Aviation Administration has supposedly stated that the can is a valuable navigational landmark. The Libby Cannery was the World's Largest Cannery in 1922. The cannery and area around it were all torn down to make way for office space.

Libby Water Tower - Libby, McNeill & Libby opened in 1907 and by 1922 became the world's largest cannery. The original tower supplied water to the cannery and its workers and was replaced in 1965 by the present structure. 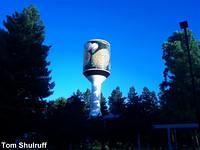 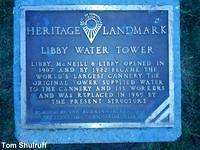