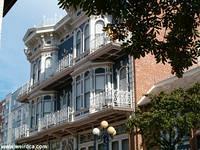 Once two different Victorian buildings, the Horton Grand Hotel consists of what was the Grand Hotel and the Brooklyn Kahle Saddlery Hotel, meshed with a bit and rebuilt on the former site of Ida Bailey's old den of ill repute in San Diego's historic gas-lamp red light district. Now the beautifully restored and rebuilt Horton Grand Hotel has many spooky inhabitants.

In 1886, the Grand Hotel opened in San Diego. A replica of the Innsbruck Inn in Vienna, Austria, it was the Victorian jewel of the town complete with split staircases carved from one hundred year old oak. President Benjamin Harrison even stayed at it. In 1907, it became the Horton Grand in honor of the founder of New Town, Alonzo Horton. Other notable guests include Lou Costello during the mid thirties when the Palace Sports Bar was located on site. 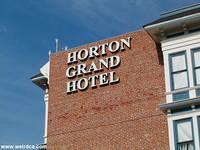 The Kahle Saddlery was well known for having Wyatt Earp reside in it for much of his seven year period in San Diego. Earp operated three different gambling halls in the city at the time. Back then it was called the Brooklyn and on the bottom floor it housed the biggest maker of saddles in the west: Kahle Saddle Shop. Notables such as Roy Rogers bought from the shop.

Both hotels deteriorated over the years, and both were threatened with destruction as the gaslight district of San Diego was being revamped. It was eventually decided that they would both be moved and joined together on the site of what was once Ida Bailey's establishment. Ida Bailey ran a business in what was the red light district. She was the Madame of several girls and had strict rules that those who worked for her had to follow. For example, the girls were not allowed to smoke, drink or wear heavy make up. As a result Ida ran a very high class and upscale establishment. 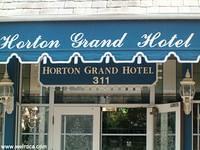 The two hotels were placed on the site and put together joined by a New Orleans style atrium. The ornate split staircases were brought, and the hotels assembled piece by piece. There is even a restaurant named after Ida Bailey. The new Horton Grand Hotel reopened in June of 1986. No two rooms are alike and armoires were used instead of closets to give the hotel an old style charm. Additionally every room has a diary for the guests to record memories of their trip to San Diego.

Long before the hotels were built, the gaslight district where they are now was a rough and tumble area. Perhaps in the 1850's, one resident of the area was Roger A Whittaker, a gambler and a pimp. As one story goes, he not only owed money, but was also caught cheating at cards. He was chased down into a hotel room in the gaslight district, where he hid in an armoire, only to be found and shot to death. Another story claims that it was the father of his fiancé who killed him in the armoire. His body could also have been dumped in swamp land in the area. 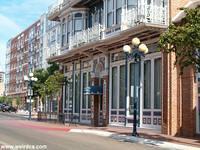 Regardless, poor Roger began haunting the area and has since moved into Room 309. Whereas most of the diaries in the hotel talk of traditional tourist events in town, this room's diary reports more on Roger's ghostly antics. He has reportedly shaken the beds, turned on and off the lights, dead bolted the room from the inside, moved lamps often placing them on the bed, tied the curtains in knots, rotated pictures, and even finished off guests' champagne. Other stories report physical contact including Roger giving female guests hugs and pulling on a guest's arm while they slept. The room has also experienced strange temperature fluctuations as Roger seems to raise the temperature of the room significantly. Sounds of ghostly poker games complete with cards being dealt and coins landing on the table can be heard at times late at night. He also will play with decks of cards if they are left out, often arranging the cards into poker hands. Much of this has been recorded by the guests in the diary left in the hotel room.

But the ghostly disturbances aren't limited to simply Room 309. Heavy footsteps have been heard upstairs. A man in western garb has been seen and then promptly disappeared before one guest's eyes. And once twenty ghosts in 1890's clothing paraded on up the spiral staircase and into the third floor ballroom.

So if you want a chilling time, perhaps you might want to visit the Horton Grand Hotel. Ask for Room 309 and say hi to Roger.