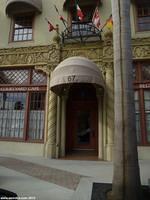 At least one ghost haunts the Bella Maggiore Inn

Designed by architect Albert Carey Martin and built in 1927, the Bella Maggiore Inn started off as El Nido which means the nest. The early history of the hotel is vague, but appears to be a dubious one, with stories stating that the hotel was a brothel back in the 1930s and 1940s. In the 40s it was also rumored to be a hangout for gangsters and serve as an illegal after hours bar that served up drugs to the clientele.

It was during this dubious past that the woman, Sylvia Michaels, lived part time in the hotel. Some stories state she was a prostitute who lived in the hotel, but other, perhaps more romantic tellers of the tale, say she was a writer who hung out in dingy bars and brothels in order to get inspiration for her writing. She passed away in 1947 in room 17 and now to this day haunts the hotel.

There are conflicting stories on what happened to poor Sylvia. The most common is that in a bout of depression, on Christmas Eve in 1947, she went into her room, emptied her closet, went inside, shut the door, and then hung herself with a belt from the hanger bar. It is said, that as she was getting older, she was having less and less clients and her regulars weren't returning. One Christmas Eve, all alone while her clients were elsewhere perhaps with their families, she couldn't handle it any more and hung herself in her room.

Another story has her deeply in love with one of the sailors who often frequented the brothel during World War II. When the war ended and the soldiers and sailors began coming home, Sylvia waited, often visiting the wharf waiting for her love to come home. Other sailors returned home, but her love did not. Then a letter arrived from him, explaining that he was in fact married, and would be returning to his family and not to poor Sylvia. To make matters worse, the story goes on to say Sylvia was pregnant with his child. Again, despondant, she goes into her room and hangs herself.

The last story has her being murdered. The killer was possibly a military man and was never brought to justice. He strangled her to death and then staged the murder to look like a suicide. This story states that she will haunt the hotel until she can get justice on the man who murdered her.

For several decades now, the hotel has experienced poltergeist like disturbances as the ghost of Sylvia Michaels still wanders the building. The most prevalent manifestation of Sylvia is the smell of a rose scented perfume. Objects have been mysteriously thrown across a room and other objects of guests (specifically men's wallets) have moved by themselves, appearing in places they weren't originally left. Lights, especially on the second floor where room 17 is located, have flickered on and off, and bulbs in the building need to be changed much more frequently than is usual. Guests have reported hearing strange buzzing noises in their ears, seen strange balls of light, and even heard the piano playing by itself. 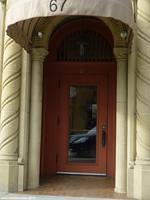 Additionally the sound of a woman sobbing has been heard on the second floor near room 17. Room 17, itself, has other localized hauntings. The closet door has moved on its own. Guests have experienced sudden drops in temperature in the room. The door to the guest room has locked itself when guests have left it for a brief time. Items in the bathroom have moved or floated through the air by themselves. And one woman, who openly mocked Sylvia in the room, felt in retaliation, icy hands close around her throat and try to strangle her.

Men have reported having pleasant dreams while sleeping in room 17. While women have had the opposite, experiencing horrifying nightmares while staying there. Women have also reported feeling like the air was suddenly being sucked out of the room. Men have experienced something ghostly pinching their behinds, and those men staying alone have reported feeling like something was getting into bed with them at night.

People using cell phones on the second floor have also had their conversations suddenly cut off by a woman screaming, screaming as if she was being murdered. Only they hear it, the person on the other line has not. Additionally Sylvia has been seen, usually as a human shaped body of light. Some people have reported her speaking, and still others have seen her looking normal wandering the hotel.

Sylvia isn't the only ghost to haunt the hotel. In addition to the ghost of Sylvia, there is also the ghost of Mark, a man who died of a drug overdose on the second floor back in the 1960s. There is the ghost of Elizabeth, who was a little girl who was murdered on the first floor back in the 1930s. And perhaps also there is the ghost of the piano player, reported to be a ghost that growls, then laughs when encountered. Still additional reports claim that guests have seen the downstairs lounge suddenly transform fleetingly into the 1940s complete with gangsters and women from that era.

The inn became the current Bella Maggiore Bed and Breakfast in the 1970s. Now adays, there is a journal of ghost experiences available in a seating area near the registration area of the hotel. The journal has many of the guests experiences written down in it, experiences they've had with the ghosts of the hotel.

Does the ghost of Sylvia Michaels reside in the Bella Maggiore Inn? Stay in room 17 and you just might find out!