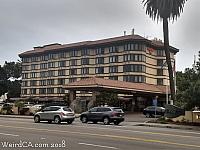 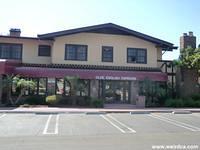 Built in 1917, the historic Santa Maria Inn is located in the city of Santa Maria, a town of about 100,000 halfway between Los Angeles and San Francisco. The Inn was originally a major stopping point for those driving between the two towns. Hearst Castle would house guests on their way to the Castle at the Inn the night before, arriving on the train in Santa Maria, spending the night in the luxurious hotel, and then taking a car up to San Simeon the next day. Guests such as Douglas Fairbanks, Charlie Chaplin, and Rudolph Valentino were all guests. If that wasn't enough to make the Inn special, it is additionally haunted. 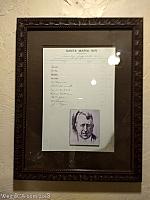 Now with 164 rooms, the hotel started with only 24 rooms and grew over the years. Other notable guests included President Herbert Hoover as well as William Randolph Hearst himself (along with Marion Davies). Cecil B. DeMille also stayed in 1923 while filming the Ten Commandments in Guadalupe.

Many of the rooms in which the rich and famous of yester year stayed in are now marked with a star on the room's door displaying who has previously stayed there. One can find Mary Pickford, Charlie Chaplin, Bing Crosby, Bob Hope, William Randolph Hearst and Marion Davies, Rudolph Valentino, Joan Crawford, Lee Marvin, amongst other famous people.

Rudolph Valentino, that wonderful entertainer, who seems to haunt everywhere, also haunts the hotel. He apparently likes to knock on room 221 and even recline on the bed in the room. There are also rumors of the ghost of a sea captain who was murdered by his mistress long ago appearing inside the hotel. He has supposedly been attached to room 210. 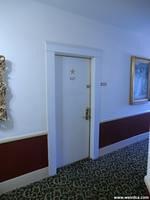 Rudolph Valentino knocks on the door to Room 221 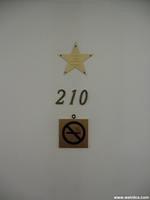 The ghost of a sea captain lurks around Room 210 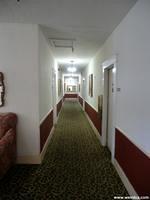 Please note, a lot of sources report Valentino attached to room 210 and the sea captain attached to room 221. But when our team visited and looked around the second floor, the hotel had room 221 marked as Valentino's room. So it is our belief that the two numbers should be switched for the the two ghosts, and we have done so in this article.

In addition to the sea captain and Valentino's antics, the hotel plays host to a piano that plays by itself, mysterious footprints, unexplained perfume scented smells, spinning clock hands, opening and closing doors, music coming out of disconnected speakers, ovens opening, and even an elevator starting up and going to a certain floor at the same time of the day.

In addition to the hotel rooms, the ghostly activity has also been seen in the gardens and the cellar. Rooms have also suddenly turned ice cold, and even once a balloon followed a housekeeper around, even going down stairs with her.

Lastly, Richard Senate along with psychic wife, Debbie Christenson, conducted a séance in the Inn and contacted a young cocaine addict with a nickname of Peppy (because she was so peppy) who was often a guest in the guest house at Hearst Castle, and was in the Inn awaiting a car to take her up to San Simeon. Who this young woman really was, is unknown. 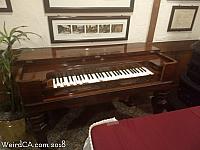 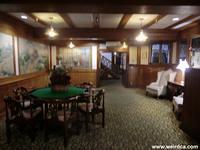 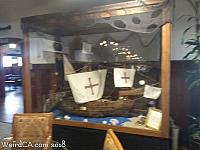 Model of the Santa Maria

And if the hotel isn't haunted enough for you, another ghost lurks just across the street in the auditorium of Santa Maria High School.