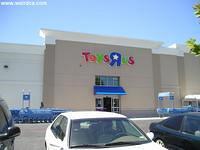 Does a ghost of a farm hand haunt this toy store in Sunnyvale?

In Sunnyvale, shoppers at a local Toys "R" Us have to deal with more than just children wanting the latest action figure or video game. There's also a ghost haunting the aisles.

In 1881, a wealthy judge and businessman named Martin Murphy owned the property, owning huge amounts of the area. He supposedly threw a golden wedding anniversary, hosting a large party and inviting ten thousand people to celebrate for multiple days. Martin Murphy had a daughter, one Elizabeth Yuba Murphy Taaffe. Yuba Drive. about two and a half miles from the Toys "R" Us, and Taaffe Street, about a mile away, are both supposedly named after Elizabeth. As a side note, Murphy Avenue, around the corner from the Toys "R" Us is rumored to have been named after Martin Murphy.

Johnny Johnson, also known as Yonny, was a local minister of a small church. He was madly in love with Elizabeth, but due to his station was unable to marry her. Elizabeth never knew that Johnny was madly in love with her and in 1881 she married another, a lawyer from back east (it is possible that Murphy's golden wedding anniversary and daughter's wedding may be the same event, just mistold depending on the story).

Johnny became emotionally distraught and depressed after the love of his live, Elizabeth, married another. In some stories he worked for Martin Murphy and was chopping wood one day in 1884, still depressed over the loss of Elizabeth. Not paying attention, he accidentally cut his leg with an axe and bled to death on the spot. The same spot that is now the Toys "R" Us.

Of course there are variations of the story. Another one states that Johnny contracted encephalitis after Elizabeth was married. He lost his mind, became known as "Crazy Johnny", became a hired hand on Murphy's ranch, and died of an accident there as above. Another story has Yonny dying much later as a bachelor, forever mourning the loss of his Elizabeth. And another variation has Martin Murphy dying in 1884 and it is him instead of Johnny who haunts the store now.

In 1970, they built a Toys "R" Us on the location that Johnny died chopping wood back in 1884. According to psychics who have investigated the location, Johnny is still haunting the area, still waiting for Elizabeth to notice him, and he feels that he must stay in the area until she does. He also has this need to look after the area and the things in it. During one of the investigations, a seance was conducted by psychic Sylvia Browne. During the seance, an infrared picture supposedly caught a tall thin figure standing where no one was. The figure was staring depressed at the floor, which lines up with the story that Johnny was depressed over Elizabeth marrying another. Non infrared photography did not capture the form.

Since the store first opened, employees have often arrived in the morning to find the aisles strewn with toys. Merchandise has been discovered in the morning rearranged and stacked in strange patters, completely different than it was left the night before. Light switches flip on and off. Faucets in the women's restroom have turned on while people are in the bathroom, then stop just as suddenly as they started. At other times, the faucets keep turning themselves on, no matter how many times the poor shopper tries to turn them off. Employees have reported seeing boxes move in the storeroom, of having had ladders suddenly steadied by unseen hands, while some employees refuse to go into certain areas of the store alone.

Sounds have been heard including footsteps, wood chopping, and once a disembodied voice that screamed to be let out of the locked store. Balls have bounced mysteriously down aisles and teddy bears have floated off shelves. Baby swings have swung all by themselves. Aisle 15c supposedly often smells like freshly cut flowers and women have complained that mysterious invisible hands will occasionally tap them on their shoulders or caress and stroke their hair.

The TV show, "That's Incredible" has featured the store in one of its episodes.

Other Toys "R" Us's have been reported as being haunted including one in San Bernardino and one in North Bergen, New Jersey. Another story relates the tale of a psychic who lived alone in a house on the same land as the Toys "R" Us prior to it being constructed. This psychic also is rumored to have encountered and knew of the ghost of Johnny.

Regardless of if the store is haunted by the former land owner Martin Murphy or if it is haunted by the depressed and love lost Johnny Johnson who cut himself with an axe while chopping wood, toy shoppers need to be on the lookout for spiritual activity in Sunnyvale!