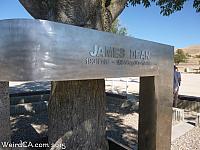 The James Dean Memorial in Cholame

James Dean Memorial Junction at the Intersection of 46 and 41

On September 30th, 1955, James Dean died in a terrible car crash on what is now Highway 46 (then numbered 466). Located a short distance away from the crash site is a sculpture made of concrete and stainless steel surrounding a tree outside the Cholame "post office" and Jack Ranch Cafe. This is the James Dean Memorial. It was made in Japan in 1977 and the entire project was done by Seita Ohnishi. The location of the actual crash site, the intersection of Highways 41 and 46 was dedicated the James Dean Memorial Highway in September 2005.

The "post office" is little more than a few mailboxes, and the Jack Ranch Cafe is your typical greasy spoon. It has several pictures and art show casing James Dean hanging all over the walls in the restaurant. The grounds have several signs stating "Beware of Rattle Snakes". The memorial to James Dean has several plaques next to it, and visitors have sprinkled several coins upon it. 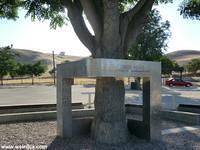 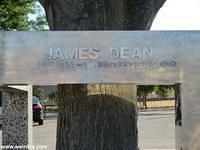 Further East down 46 close to the small town of Lost Hills, where the highway intersects Highway 33, on the Southwest corner of the intersection is Blackwells Corner General Store also known as James Dean's Last Stop. They have two wooden signs outside the gas station and shop of James Dean. One is a super tall version of James Dean on the eastern side of the store pointing the way to the entrance, and the other is a memorial sign of Dean's head and shoulders that commemorates the actor and his last stop.

Inside the general store is a fifties diner, a variety of James Dean art (especially across the walls of the diner), and lots of fifties memorabilia and pictures available for sale, along with the regular items you expect to find in a highway general store.

In one of those bizarre twists of fate, on September 17th, 1955 almost two weeks before the accident, Dean filmed a thirty second commercial for the National Highway Safety Committee stating at the end of the commercial "Take it easy driving. The life you might save might be mine." 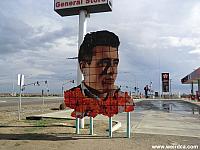 The Last Stop of James Dean 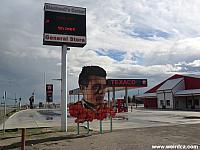 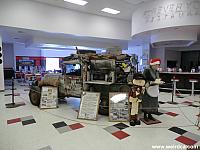 By the cafe at Blackwell's Corner

Supposedly if you believe the urban legend, a week before his death, James Dean introduced himself to the actor Alec Guinness. While doing so, he showed him his brand new Porsche, "Little Bastard". Supposedly, Guinness thought the car appeared 'sinister' and told Dean: "If you get in that car, you will be found dead in it by this time next week." According to legend this was on September 23, 1955, seven days before Dean's death. 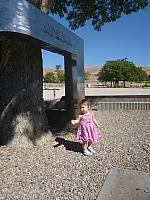 Tiffany at the Memorial

The accident occurred when Dean was driving west on Highway 46 and reached the intersection of Highway 41. A Cal Poly State University student, Donald Turnupseed, was making a turn onto 41 and entered Dean's lane without seeing him. Although evidence of the wreckage shows that Dean was probably only going 55 mph, he was unable to stop. (Dean also received a speeding ticket at 3:30 pm that day outside of Bakersfield). Police ruled that the color of Dean's Porsche combined with the twilight hour, camouflaged his car, hiding it in the light from Turnupseed's vision. Turnupseed made only brief comments to a newspaper after the crash and then never commented on it again until he died in 1995 of lung cancer. Dean's passenger, his mechanic, Rolf Wuetherich, escaped with several injuries including a broken jaw. He died in 1981, ironically, in a car accident in Germany. 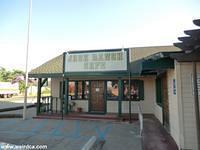 James Dean died while driving along this road in one of only ninety Porsche 550 Spyders. Dean nicknamed the car "Little Bastard" and it had the number 130 on the front, side and back. The car was also customized by George Barris who would notably go on to do work on the Batmobile, the General Lee of Dukes of Hazzard, and KITT of Knight Rider. After James Dean's death, legend states that the car was cursed. George Barris bought the car for $2500 supposedly for parts. Upon arrival at the garage, it fell off the trailer and broke a mechanic's leg.

Later the engine and drive-train were sold. The buyers were two doctors planning on using them as parts in their own race cars. In their very first race, one car spun out of control and hit a tree, killing the driver, while the other rolled over severely injuring the driver. The tires were next on the list. Two tires were sold and they blew up at the same time causing the buyer's car to careen off the road. 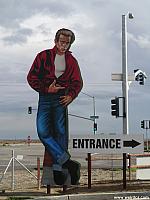 Even car thieves weren't immune to the curse of Little Bastard. Two were reportedly injured in their attempts to steal parts of the car. Barris eventually loaned the car to the California Highway Patrol for a highway safety exhibit. The first time it was exhibited, the garage storing Little Bastard burnt down in a fire, consuming everything except the cursed car, which was not even touched by the blaze. The second time was at Sacramento High School, when the evil car fell onto a student breaking the student's hip.

Little Bastard also caused multiple accidents when it was being transported. Supposedly killing a truck driver of the flatbed truck it was on. The driver lost control of the truck and was thrown from the cab. Little Bastard then fell off the flatbed and crushed him. It fell off yet another flatbed while in transit, and even a parked truck carrying it suffered the consequences when its brakes came undone and the truck, Little Bastard and all rolled down crashing into yet another car.

The last two incidents involve Little Bastard in 1959 while on display in New Orleans supposedly simply falling apart into eleven different pieces for no apparent reason. Then in 1960 while en-route on a train to Los Angeles (although I've seen conflicting reports state a truck), the car mysteriously vanished, never to be seen again.

Occasionally there are reports of Little Bastard sometimes along with James Dean rocketing ghostly down the highway near Cholame, possibly re-enacting the fatal accident, so be careful when cruising California's Highway 46.

The sculpture was originally commissioned by James Dean from artist, Kenneth Kendall, who had impressed Dean with a sculpture of Marlon Brando. Supposedly Kendall started the sculpture the night that Dean crashed. A copy of the bust is also located in Fairmount, Indiana at the James Dean Memorial Park.