There's a few giant Coca-Cola products standing tall in California including some giant coke bottles outside the Coca-Cola Bottling Plant in Los Angeles, which itself looks like a giant ocean liner, as well as a Giant Coke Cup in Sacramento. Over in Nevada, in Las Vegas, a giant coke bottle stands on the strip as part of the World of Coca Cola.

Located in Los Angeles, the building for Coca-Cola, built in the thirties was constructed to resemble a giant ocean liner. On either side of it are giant coke bottles and a third one sits maybe half a block or so down the street. The ocean liner building is the result of architect Robert Derrah, and was actually his method of combining three separate buildings into one. The employees were growing tired of having to walk outside from building to building, and Derrah constructed the ocean liner motif which wrapped around the three buildings. The building is outfitted with port holes, planking decks, air horns, and other ship like qualities. Additionally the theme is spread throughout the inside with life preservers, nautical items, captains' hats, etc. The neighborhood's pretty unsafe looking, so travel there at your own risk.

A building in Sacramento has a gigantic three story tall Coca-Cola cup complete with a straw. Built in 1996, it is illuminated at night and located at the south west corner of Arena Way and Gateway Park Boulevard. You can park at the parking lot for the furniture store across the street on the south east corner. The building it is outside of is a Coca Cola bottling plant as well.

Lastly there's a gigantic multi-story Coke bottle in Las Vegas right near the M&M store on Las Vegas Boulevard. The giant Coke bottle is part of the World of Coca Cola official store located there. Inside one can buy almost anything Coca Cola. There is also a large polar bear statue that you can pose for pictures with as well as a Coca Cola tasting menu where you can sample Coke from sixteen different countries. 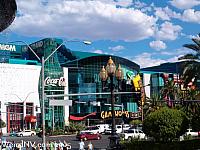 Polar Bear at the World of Coca Cola

Other Giant Coke Products include: