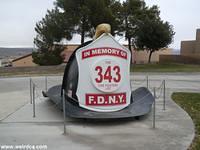 The fire department in Barstow paid tribute to the fire fighters who died on September 11th, 2001 by building a memorial in the form of a large fire helmet in front of their district headquarters, Fire Station 361.

The helmet is a FDNY fire helmet replica, is topped with a large golden eagle head, and bears the number "343" on the shield, which is the number of members of the New York City Fire Department that died in the collapsing of the Twin Towers.

The helmet is located off of Interstate 15, on Barstow Road. Do not pull into the driveway after the helmet as that's for emergency vehicles only. Instead park further down Barstow Road in the parking lot for the Desert Discovery Center. The Desert Discovery Center holds the 2nd Largest Iron Meteorite in the United States also known as the Old Woman Meteorite. It was discovered in 1975, but was held by the Smithsonian Institute until 1980 (they also carved off a 942 pound piece from the original 6,070 pound rock). The meteorite is some four and a half billion years old. 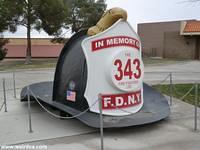 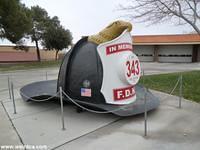 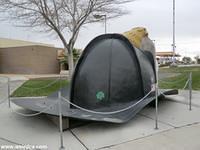