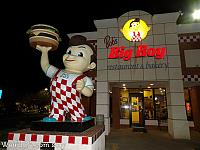 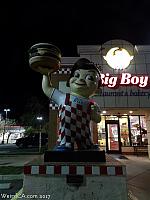 Bob's Big Boy started in 1936 when Bob Wian purchased a ten stool hamburger stand called "The Pantry" in Glendale. The food stand cost $300 which Wian acquired by selling his car, a DeSoto Roadster. The small restaurant was renamed "Bob's Pantry". Supposedly six months later he invented the first double-decker burger, or a burger with two patties. One of his patrons was a six year old boy named Richard Woodruff, who loved the double-decker burger so much, that Wian named the new burger "Big Boy" after his nickname for Woodruff. Eventually the name of the restaurant was changed and a mascot, with some resemblance to Woodruff was created.

Today, although there are a few dozen Bob's Big Boy restaurants and statues in Michigan, there are only five remaining active Bob's Big Boy restaurants in California! There are even more buildings in the state that use to be Bob's Big Boys. The five remaining restaurants can be found in: Burbank, Calimesa, Downey, Norco, and Northridge. All have at least one Big Boy statue, and several even have two or more. In addition to these five locations, several more Bob's Big Boy statues still exist in California at non Big Boy Restaurant locations. The mascot of Bob is still very well known throughout California, so much so that Dr. Evil in the movie Austin Powers even disguises his spaceship as a giant Bob statue.

Of the five remaining Bob's Big Boy Restaurants in California, Burbank is the oldest, not only in California, but in the entire chain. An architectural treasure, the location was designed by architect, Wayne McAllister, and built in 1949 by locals, Scott MacDonald and Ward Albert. The location has at least two Bob statues, one of which is between the giant tower sign for the location and a historical plaque. The giant freestanding sign is seventy feet tall and has pink and white neon. The second Bob statue is a smaller one, sitting on the roof, watching a patio and the patrons. He is located on the far right side of the building. 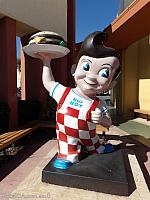 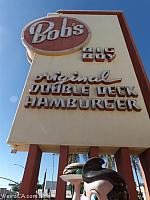 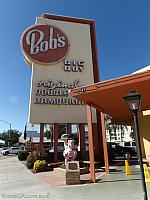 There's also a famous Beatles Booth due to the musical group having dined at the restaurant back in the summer of 1965. The restaurant is also famous for starring in the film Heat starting Robert De Niro and Al Pacino. Several important scenes were filmed in the location including a meeting between De Niro, Val Kilmer, and other members of their criminal partnership. In the movie, Dennis Haysbert worked in the location's kitchen. 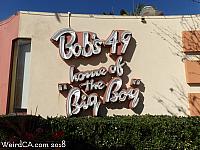 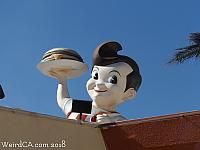 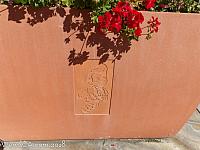 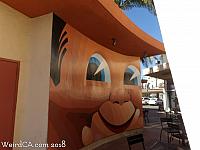 California designated the building a Point of Historical Interest in 1992 and a plaque is to the right of the sign and Bob statue. In 1993 the location was restored more back to its original design, the dining room was remodeled, an exterior patio was added, car hop service was brought back on the weekends, and the historical sign was fixed up. As an added bonus, both statues were created in the 1960s by International Fiberglass, the creators of Muffler Men and many other giant fiberglass statues.

This restaurant was built in 1949 by locals Scott MacDonald and Ward Albert and is the oldest remaining Bob's Family Restaurant in America. It was designed by respected architect, Wayne McAllister incorporating the 1940s transitional design of streamline modern style while anticipating the freeform 50s coffee shop architecture. The towering Bob's sign is an integral part of the building's design and its most prominent feature. 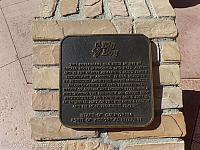 In Calimesa is one of the last five remaining Bob's Big Boy restaurants in California. The restaurant in Calimesa has two Bob statues, one outside and one inside. The one outside is up on a pedestal and interestingly is missing the plate that usually sits under Bob's hamburgers. The inside one looks to be the normal Bob. 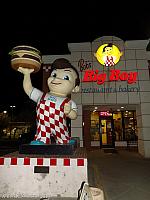 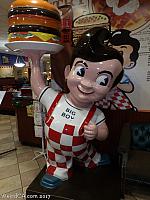 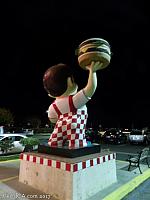 Norco also has one of the last five restaurants in California. The town of Norco is also known as Horsetown USA! There are several horse trails throughout town, and it is not uncommon to see the residents pull up to a business in town on a horse instead of getting out of a car.

There are at least three different Bob statues at this location. First is your standard sized, normal Bob with his arm holding up the plate and the burger. Second is the normal Bob, but he's been customized to be wearing a cowboy hat, probably in honor of the town's nickname, and he also has a larger double patty hamburger! Lastly, there's a smaller Bob sitting on the roof, peering over the edge, watching those below. 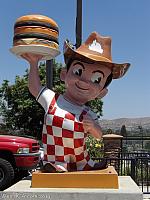 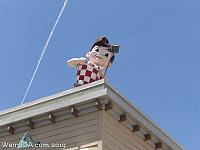 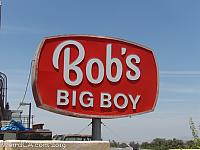 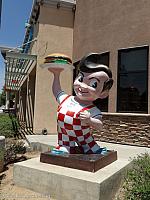 Other Bob's in California 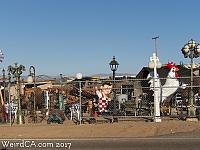 Unfortunately, there are more closed Bob's Big Boys in California than open ones. With former locations in at least Lakewood, Alhambra, Long Beach, Garden Grove, San Jose, San Luis Obispo, San Diego, Torrance, Pomona, and Fresno, it's no surprise that there's a few other Bob's Big Boy statues floating around the state at locations other than actual hamburger serving Bob's Big Boys.

You can find other Bob statues in Alhambra, Atascadero, Burbank, Elk Grove, Escondido, Hayward, Long Beach, Malibu, and San Luis Obispo. Woodland also has a reproduction. Finally there are at least two places that often sell Bob's Big Boys: Main Street Collections in Hesperia not only has at least one for sale, but can make new Bob's too, and The Barnyard in Acton also carries the statues.

For some reason a tractor auction and sales company in Atascadero has a Bob statue. He is located on the back edge of their property overlooking Highway 101. He is easiest seen driving north on the highway and can be seen to the left watching the cars speed on by.

Hayward's Bob is located at Bell Plastics which is home to Bruce Kennedy's large and ever growing collection of fiberglass statues. Mulitple Muffler Men, two Doggie Diner Heads, a Sinclair Dinosaur and several other statues share the location with this Bob statue.

This Bob is one of the versions where he is holding his suspenders instead of a giant burger. He is almost entirely a solid white color with the exception of his flesh on his arms and face and his left foot which is blue. Additionally he has two unique modifications. He has brass knuckles on his right hand and an earring in his right ear earning him the nickname Bad Bob. There is a rumor that he was owned by a tattoo shop before Bell Plastics acquired him. 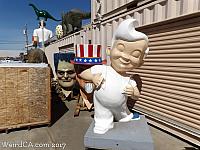 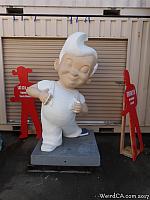 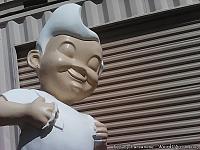 San Luis Obispo, long ago, use to have an actual Bob's Big Boy restaurant. Sadly it does not anymore. But luckily, a candy shop called Rocket Fizz plays host to a Bob statue. He's near the back right of the shop and is in perfect condition. I'm not sure if he came from the former restaurant in the area. The shop also boasts several other figures including some giant monsters from Pixar's Monsters Inc., a Power Ranger, the mascot in blue from the Fallout game, some Simpson's characters, and even some Star Wars objects and characters. An animated Jack Skellington shows up during Halloween as well. In addition to all the candy, there's also a large selection of specialty sodas. The shop is definitely worth a visit. 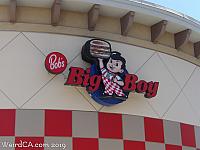 There's a leftover Bob's Big Boy statue in Alhambra in an Asian restaurant called Noodle World. The location was a former Bob's Big Boy location that closed in 1996. Believing the location still needed a statue, Noodle World's owner bought a slightly smaller version of the statue at a flea market, and it's been in his restaurant ever since for over twenty years! He pays Big Boy $1 per year for the right to display the statue.

Burbank Historical Society has one on display in their museum. The statue though is holding his suspenders instead of lifting up a giant hamburger. This could be a version of Bob from the 1950s, and it is the version that the Hayward Bob started as before his modifications.

Deer Park Winery & Auto Museum in Escondido has a Bob's Big Boy. There's one hanging out on the docks of Naples Canal in Long Beach. Malibu Wine Safaris has wine tasting along with an exotic animal tour, and an old Bob's Big Boy statue! Brookside Equestrian Park in Elk Grove appears to have one outside a barn like structure, although this Bob seems to be a different style. And Reiff's Gas Station in Woodland, CA has a reproduction or a knock off of a Bob's Big Boy and as a result he looks slightly different than the others. For example his hamburger does not rest on a plate.

Lastly, there's a residential house in Los Angeles that decided to use Bob's arm and hamburger as its mailbox! The arm is the mailbox post, and the burger is the actual mailbox.

Here are the locations of the five remaining Bob's Big Boy Restaurants in California: 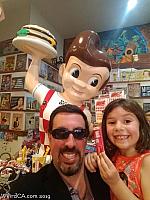 Here is a list of the locations for the other Bob's Big Boy statues in California:

In Baker, to the right of the World's Tallest Thermometer use to be a Bob's Big Boy Restaurant. It originally had at least two Bob statues, one normal sized one standing in front of the front door, and a second one hanging out on the roof. The restaurant sadly closed, and was replaced with a Bun Boy, which also closed. After sitting vacant for a while the location has been fixed up and painted, and appears to be a new restaurant. 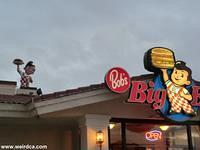 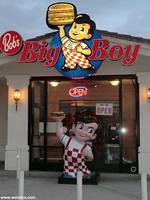 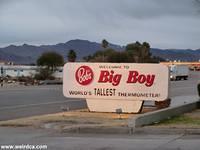 As mentioned previously, there are a few dozen other Bob's Big Boy Restaurants in Michigan, which is now home to the company's headquarters. Additionally back East, one can find Frisch's Big Boy, a former franchisee who now owns the trademarks for Big Boy in Indiana, Kentucky, and parts of Ohio and Tennessee. Dave Frisch had a franchise agreement with Bob Wian until 2000, where he could operate in several states for the low price of $1 a year. The agreement came to an end in 2001 after the Big Boy restaurants were purchased post bankruptcy. When Frisch's separated from Big Boy Restaurants, they were able to maintain their right to the trademark in their areas. Although some of the statues at these restaurants look the same or similar to the Bob statues on the west coast, many also have a different feel. Commonly referred to as East Coast Big Boy statues, Frisch's Big Boy is a little thinner, holds the hamburger differently, and is in a different pose. A new statue has slowly been appearing, looking a bit more like the West Coast Big Boy, but having striped overalls and different shoes. He's also holding his burger up with his left hand.