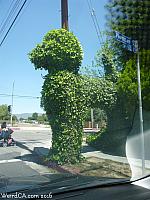 The Ivy Poodle of North Hills

What do you do with ivy that escapes your fence, grows over nearby support wires, and completely overtakes a nearby telephone pole? Well, if you're North Hills resident, Brian Welch, you embrace your inner gardner and create a giant topiary poodle, of course!

In 1986, the former hair stylist, Welch, took his sheers to the overgrown ivy at the corner of Hayvenhurst Avenue and Plummer Street, and created a fifteen foot tall poodle! The telephone pole serves us the dog's chest and front legs with the head hanging off over the street. The dog's body is built around a horizontal support wire. It's somewhere from twelve to fifteen feet in height. Additionally there are paw prints in the sidewalk nearby the topiary hedge. As long as the dog doesn't interfere with the telephone service that the utilities attached to the pole provide, the phone company has no plans to remove the canine.

It occasionally is done up for the holidays, most notably as a reindeer for Christmas complete with a light up red nose, a giant red bow and an antler coming up off its head. 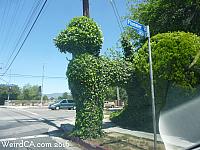 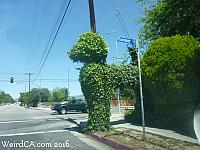 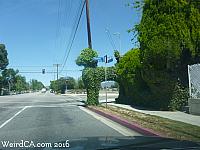