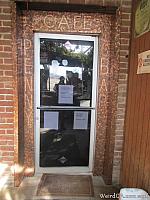 The Penny Bar in McKittrick

Welcome to McKittrick, a small town located where Highways 33 and 58 meet. It has perhaps 115 people living there, but has a hotel, the McKittrick Hotel. What's so notable about this? Well in the back of the hotel is a bar, which in of itself is not that unusual. But the bar is completely covered with pennies! 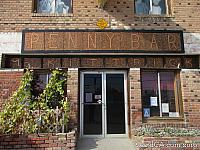 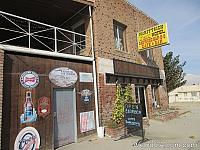 It supposedly took the owners six years to cover the entire bar in pennies. And, I mean, the entire bar! The bar itself, pool tables, floor, the little hallway leading to the bathrooms, the bathroom doors, around the stuff on the wall, etc, all covered in pennies! As mentioned the sign in the front of the hotel is made out of pennies, and pennies surround and outline the side door as well leading into the bar. If you're worried about the bathrooms, they are not covered in pennies; I'm assuming for sanitary reasons. 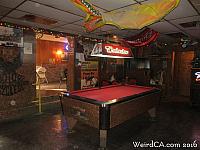 The pool table also has pennies on it 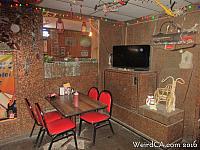 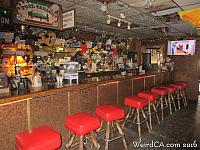 The establishment is owned and run by Mike and Annie Moore, former termite exterminators who relocated here from Eureka. They purchased the property in 1999, at which point Mike began covering the entire bar in the copper coins. It is now estimated that over 200,000 pennies cover the floor, and estimated that over a million pennies can be found throughout the bar! So yes, this small bar has a cash value of over $10,000 just in what's glued to it. It comes to 304 pennies per square foot.Additionally an 1883 Indian head penny lurks amongst its younger fellows somewhere on the bar top. 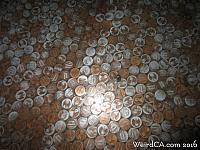 Pennies in the floor 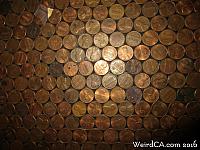 Pennies in the front of the bar 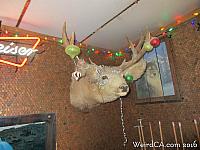 The penny collection originally began as Annie's, but Mike got the task of having to glue all the pennies to the surface. The original collection is rumored to have been enough to cover a third of the establishment, with the remaining two thirds coming from donations and just simply over time. The bar even uses different shades of pennies to spell messages. Newer, shinier pennies surrounded by duller, darker, older pennies have been used to spell out the words "Ladies" and "Mens" on the bathroom doors, for example. The TV has a message below it written in the pennies. And I've heard that the message "Mike ♥ Annie" is hidden somewhere behind some liquor bottles. 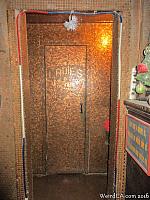 Door to the ladies restroom 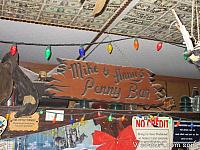 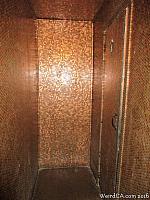 Short hallway to the men's restroom

The roads up to McKittrick are completely covered with oil drills, and much of the surrounding economy is based on the oil business. The hotel no longer operates as a hotel, just as a cafe and bar now. The food, I am told, is quite good, and if you were to stop by during lunch time on a weekday, you would have a difficult time finding a seat due to all the oil workers eating there. The bar has hard liqor and domestic beer. As an aside, legend has it that the building is also haunted! But if you are out in the middle of California, McKittrick's Penny Bar is well worth the stop for a quick beer!